Well, this is it. Time to review my most anticipated film of 2016! *MILD SPOILERS*

Since being announced in May 2014, Rogue One: A Star Wars Story, has been my most anticipated film of the year.  Coming from my favourite movie franchise, director Gareth Edwards was tasked with telling a spellbinding standalone film that also leads into the events of the original phenomenon, 1977’s Star Wars.  Despite reports of extensive re-shoots and problems on set, none of that deterred me from getting astoundingly excited for a movie that magnifies the world of Star Wars.  While Star Wars: The Force Awakens had the luxury of featuring characters that moviegoers already knew, Rogue One introduces new characters, expanded story arcs and a unique and different visual style that leads to one of the best Star Wars films ever made.

Rogue One: A Star Wars Story follows Jyn Erso (Felicity Jones), who is the daughter of the reluctant designer of the imperial superweapon known as the Death Star.  Her father (Madds Mikkelsen) relays a message to the rebellion stating that the weapon can be destroyed, but only if they can steal the design plans for the colossal planet-killer.  Jyn forms a rag-tag group of rebels to help complete the mission which includes the morally grey Cassian Andor (Diego Luna) and his reprogrammed imperial droid K-2SO (Alan Tudyk), the blind, but force sensitive warrior Chirrut Imwe (Donnie Yen) and his mercenary protector Baze Malbus (Jiang Wen), Bodhi Rook (Riz Ahmed), a former imperial pilot who has defected to the rebel alliance, and Saw Gerrera (Forest Whitaker), a veteran of the clone wars turn rebel extremist.  Together, they launch a full-scale assault on the empire in an attempt to foil the villainous plans of Ben Mendelsohn’s Imperial special weapons director, Orson Krennic.

I will state right now that Rogue One is by far my favourite movie of 2016.  The film doesn’t just expand the Star Wars lore, it tells an action-packed, character-driven story that enhances the overarching narrative of the universe.  Rogue One’s premise is based off of a single paragraph within the opening crawl of A New Hope which speaks about the rebel spies who stole the original plans for the Death Star.  What separates this film from the main “Skywalker story” is the emphasis on the “wars” of Star Wars.  Edwards introduces viewers to a harsher, gloomier and realistic story that is filled with genuine surprises and various twists and turns that will leave the viewer in awe.  The bombastic action sequences will transport the audience directly into the battles fought between the rebels and the empire and the emotional weight carried by the main characters demonstrate that the stakes in this film are very real as it is life or death situations.

Felicity Jones shines as Jyn Erso, who is portrayed as an individual constantly on the run, doing anything and everything she can to survive.  As a character who originally has no opinion on who is right in this war, Jones plays the conflicted, but strong Erso beautifully, exhibiting real will and determination at a time where all hope seems to have been lost.  From her entrance as a common street criminal to her show of heroism when the rebellion needed it the most, Jyn displays raw emotion concerning what it truly means to be thrusted into a never-ending war and how to adapt to survive.

The show-stealers of the film however have to be Donnie Yen and Alan Tudyk.  Every time Yen’s Chirrut Imwe appeared on screen, I couldn’t help but smile as I knew an action packed sequence involving the character was about to follow.  He is a complete and total badass on every level, from taking out a squadron of Stormtroopers singlehandedly to his absolute devotion to the force.  Yen brings a certain level of calmness and faith that the group needs and provides some much needed assistance when the rebels seem down and out.  Alan Tudyk’s motion capture performance as K-2SO can be defined as being one of the funniest performances in all of Star Wars.  An overall complex character, Tudyk successfully delivers a performance that will have the droid becoming instantly recognizable alongside franchise favourites such as R2-D2 and newcomer BB-8.  The droid is the prime source of comic relief, providing nerve-wracking statistics to the rebels without a worry in the world.  His dry and blunt nature also provides him with being one of the characters with the most heart.  K-2SO has a unique sense of loyalty to Diego Luna’s Cassian Andor as he was the one who “set him free,” which leads to one of the most climactic sequences ever filmed for a droid in Star Wars.

When speaking about the other characters, each actor delivers a great performance. Jiang Wen’s Baze Malbus is shown as a mercenary fighting against the empire but it is his enduring nature and loyalty to his blind friend that makes the viewer feel that they have everything they need to know about the character.  Diego Luna is fantastic in the role as the hardened rebel soldier, Cassian Andor.  This is a character that struggles with his morality as he questions whether what he is doing for the rebellion is right.  It is a new approach to the otherwise squeaky clean portrayal of the rebellion as they were always seen as the good guys simply doing the right thing.  Cassian shows that even the rebels get their hands dirty and what a real response to war looks like.  Riz Ahmed’s Bohdi Rook was the perfect example of what living under the tyrannical empire was really like.  Bohdi is a man who has experienced the hellish nature of the galactic empire by being an imperial pilot.  He demonstrates complex emotional depth as he has now seen that both sides in this civil war are capable of committing evil acts but knows that he has the skills to help the rebellion defeat the rule of the empire once and for all.

As for the main antagonist, Orson Krennic, Ben Mendelsohn plays the intimidating and ambitious weapons director stunningly.  Mendelsohn brings a sense of urgency and power to the character as he is seen trying to prove himself to the higher-ups in the Empire while continuously getting knocked down a peg.  Again, this is a first for the Star Wars series.  It was interesting to see a villain who is trying to prove himself as a competent and strong leader within the empire.

Rogue One is a film that will definitely be remembered for its amazing action set-pieces that blend practical and CGI effects perfectly.  The rebels are constantly at an uphill battle against the humongous machine that is the empire and the movie makes that known.  The film, at its core, is a gritty war/heist film that is infused with sci-fi-action sequences that keep the viewer on the edge of their seat for a good chunk of the film.  Edwards’ hands-on, on-the-ground approach to filming makes you feel as if it is you that is experiencing the dangers of the battle.  I will say that this film includes a near-perfect third act that includes one of the best confrontations between the empire and the rebels ever filmed.  It is exciting, emotional, and above-all-else, action packed and has a space battle for the ages.

It needs to be said that Rogue One is probably the most stunningly shot Star Wars film.  Edwards and Disney could not have picked more beautiful locations to shoot their films.  Using locations like the Maldives, Iceland and Jordan gives the film another layer of realism and only adds to how good this film already is.

Now, Rogue One may be my favourite film of the year, but that doesn’t mean it is flawless.  The film suffers slightly from a rather choppy first act.  Rogue One tries to introduce each main character on their respective planets and, while successful in doing so, it does not go as smoothly as it probably hoped to.  While I liked the character of Saw Gerrera, I felt that he was underused.  I would have liked to see what made Forest Whitaker’s character become such an extremist and to actually see what it means to be a rebel extremist.  Now, I won’t spoil the name, but a character from the original trilogy returns in a fairly substantial role, recreated using CGI technology.  Despite being happy to see this character back on screen, I thought that the CGI was average at best and Industrial Light and Magic could have done a much better job at animating the character.

While Gareth Edwards carried the daunting task of directing the first standalone Star Wars film, composer Michael Giacchino was tasked with scoring the film, becoming the first person other than John Williams to score a live-action Star Wars film.  Giacchino composes a phenomenal soundtrack that incorporates original themes from Williams, while also creating new and exciting music that will have the audience humming it for days on end.  The intense, thunderous orchestral sounds firmly plant the viewer within the Star Wars universe while still hearing little tidbits of John Williams’ iconic riffs and motifs. 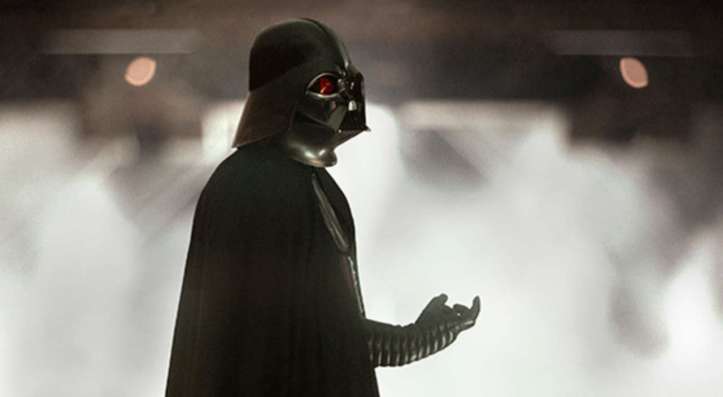 Now, as for legendary villain Darth Vader, I will say that, while he isn’t in the film for more than 7-10 minutes, he is still absolutely fantastic and horrifying.  The film portrays Vader as the most terrifying force in the galaxy next to the Death Star.  I would go so far as to say that his final appearance on screen is one of the greatest Darth Vader scenes in history.  It shows how powerful the former Anakin Skywalker has become and how scared the rebellion should be.

Rogue One: A Star Wars Story offers new and returning fans of the Star Wars franchise an exciting, edgier sci-fi film and establishes that there is more to Star Wars than the Skywalker saga.  Rogue One contains emotion, the feeling of hope and has the gritty feel of a war movie.  The film executes its plot exquisitely and even improves upon several things in A New Hope.  Simply put, this is the Star Wars prequel that fans have been waiting for and it doesn’t even include the Jedi.  With wonderful new lead characters, epic action sequences and loads of well-executed fan service, Rogue One is an extraordinary recreation of George Lucas’ galaxy far far away but from a darker, more realistic perspective.  This is a remarkable film, a strong start to the anthology series of the renowned franchise and one the finest Star Wars films ever made.