A few weeks ago (I think), Warner Bros released the ten-minute preview for Batman and Harley Quinn, and it looks awesome!  Watching this preview, I thought back to Batman: The Animated Series and the excellent animated films that spun off from it.  Batman has been featured in an excellent series of animated films over the years, and this article presents what we consider to be the ten best animated Batman film ever produced.  This was a difficult list to make, especially when it came to ranking these excellent movies, so we hope you enjoy it.

10. The last half of Batman: The Killing Joke

Okay, so this film is probably going to be the most controversial on this list (fitting as it’s a controversial movie), but just hear me out on this one.  I admit that the film as a whole is terrible for an un-godly amount of reasons, but the second half of the film is pretty good.  The Killing Joke story is a classic and the latter half of the animated feature offers a faithful adaptation of the source material.  Mark Hamill and Kevin Conroy on top of their game as they are old hats in terms of Batman at this point.  The animation, which does differ from Bolland’s artwork (and is nearly impossible to animate), still reigns true to the comic as iconic panels are brought to life by the skillful animators at Warner Bros.  For those of you who do watch this film I suggest watching the last half first, and then the movie as a whole because those first thirty or so minutes are truly terrible.  This film was placed last because while the last half is better than many other Batman films that could have made it on this list, it’s still part of a mediocre whole.

This is not the deepest or most introspective Batman animated film ever produced, but it’s just so god damn fun to watch.  This film, an extension of the Arkham game series, is really a Batman movie in name, with the true stars of this feature being the Suicide Squad.  They are tasked by Amanda Waller to enact a heist caper that brings them in conflict with both Batman and the Joker.  The film boasts excellent character work as the main draw of the movie is Deadshot’s scenes with Captain Boomerang.  The voice acting is great for the most part, with Harley’s voice actor being a weak point.  The action sequences are well directed and the character designs are realistic and practical, befitting as the Arkham games are fairly realistic. This film also contains adult themes, and would be of interest to you older Batman fans.  Honestly the best way to sell this movie is to say that it’s what the live-action Suicide Squad film should have been.

8. Batman: Return of the Caped Crusaders

This film may seem ridiculous to those of you who know Batman mainly from the Nolan series and the Arkham games.  However, I suggest that you all do check this film out because it’s loads of fun and speaks to a little talked of era of the character’s history.  The film brings the humour of the original 1966 series back to the present as Batman and Robin are faced by an ensemble cast of villains.  This movie features the return of Adam West, Burt Ward and Julia Newmar to their iconic roles from the TV series.  The other voice actors due fairly good imitations of those actors not available for this feature.  The film’s a little corny and Batman isn’t a hard edge vigilante, but for those of you who are less cynical, it will make you laugh. 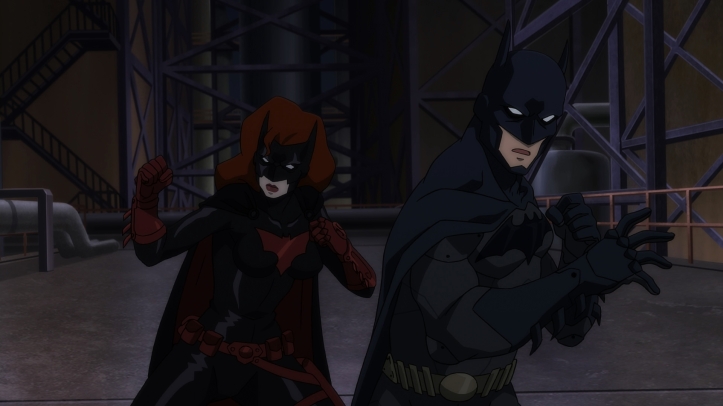 Batman: Bad Blood is one of the better offerings from DC Animation’s shared universe, mainly because it acts as a showcase for Batman’s extended family.  In the wake of Batman’s disappearance his allies need to step up to protect the city in his absence.  This film includes the animated debuts of Batwing and Batwoman (a personal favourite of mine), and the film brings these characters to the screen with the same grandeur that the printed page uses.  This film, much like many other on this list, is about how Batman can inspire others to protect their home, and that even without him there will always be individuals standing tall to do right by Gotham.  It’s become an essential aspect to Batman’s character over the years and is one reason why this film is included on this list.

This is another animated adaption of what is generally considered to be the best Batman story ever presented through the comic book medium. The film perfectly captures the voice Frank Miller uses to tell his story, keeping many of inner monologues used in the comic.  David Mazzucchelli’s artwork in the comic is inspired by the work of artists such as Alex Toth, and because of this, it lends itself perfectly to animation.  The film offers a gritty take on Gotham City that really gets across how fucked up this city is and why it needs Batman. It also offers an interesting take on a Batman who seems slightly unhinged. Not completely crazy, but definitely not all there.  In terms of voice acting, Bryan Cranston and Eliza Dushku are the break out stars. Dushku’s voice work brings out the femme fatale in Selina’s character that is present in the original work. Cranston is the definitive James Gordon voice, as he brings both hopeful optimism, but also the weariness that comes with so many years working corrupt systems 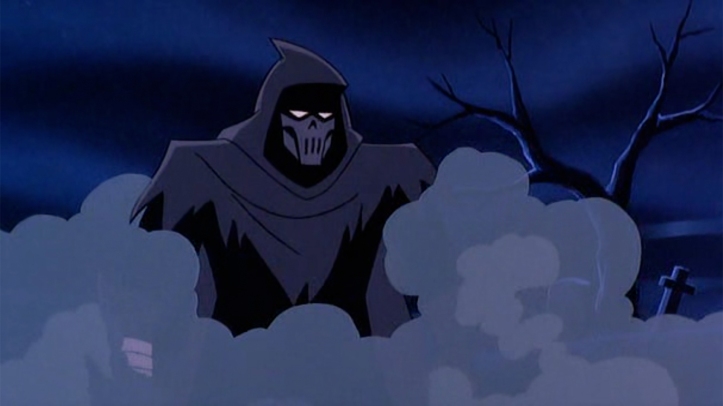 5. Batman: Mask of the Phantasm

First of all, the animation in this film is absolutely gorgeous.  The opening pan throughout Gotham is incredible and the character animation is improved over that in the TV series on which the film is based.  In Batman: Mask of the Phantasm, the caped crusader must discover the identity of a masked killer whose crimes are being pinned on him with said killer being the mysterious Phantasm.  Through flashbacks, the film delves deep into what motivates Bruce, but also admits that being dedicated to something for so long does not come without its fair share of obstacles.  As past and present collide in an ever-engrossing mystery Batman must also contend with The Joker.  While the inclusion of Joker may seem tacked on, he adds to the development of the film’s two main characters.  It is a well written Batman adventure that goes deep into the mind of its protagonist, bolstered by a fantastic cast of voice actors, with Kevin Conroy and Mark Hamill at the top of their game.  With beautiful art direction, great homages to prior Batman comics work and an electric plot, this is a Batman film worth watching. 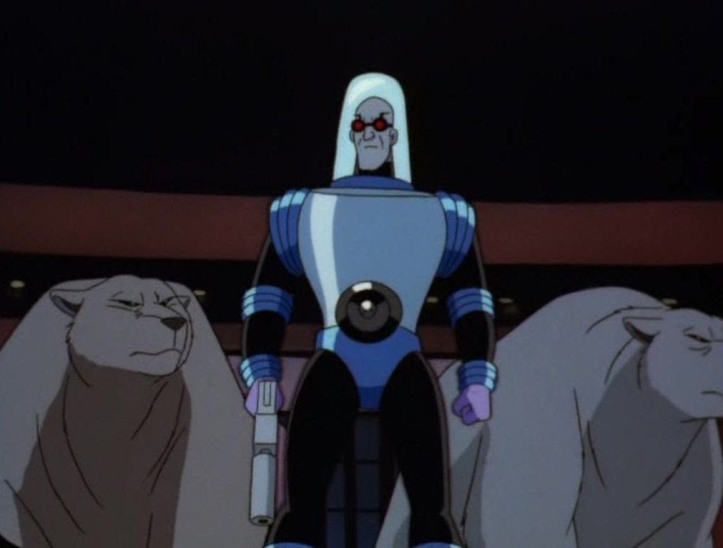 This film may have a very kiddy-sounding title, but it is a deep and incredibly moving piece of animation.  Batman the animated series was known for the excellent revamp they did of Mr. Freeze early into the series’ run, and that story is continued in this film.  Batman and Robin must world against the clock to rescue Barbra Gordon from Mr. Freeze, who plans on using her to save his dying wife. Freeze is truly the star of this film as the pathos written into his character captures the viewer’s attention, with a thrilling race against the clocks story driving it home.  Barbra, despite not wearing her Batgirl costume, proves why she deserves to be one of Batman’s partners, as she isn’t waiting for Batman to save her in this story.  And like Under the Red Hood, the last scene’s a tear jerker, but it’s a good one. 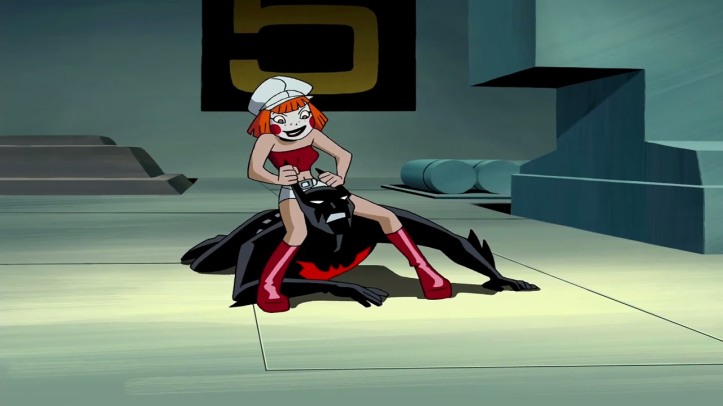 3. Batman Beyond: Return of the Joker – Directors Cut

This is the only film on the list that does not star Bruce Wayne, and that is why it shines.  This spin-off of the Batman Beyond television series chronicles the trials of Bruce’s successor as he battles Batman’s most legendary foe, The Joker.  This is a true coming of age story in the Batman tradition, as Terry has to prove what makes him worthy to wear the cowl.  The film presents a complex and enthralling mystery as to how the Joker has returned; exploring the psychology of both Bruce Wayne and The Joker.  The directors cut features scenes cut or re-animated that weren’t seen on Kid’s WB, and while the original is a fine film, the directors cut is the definitive version.  With stellar animation from the likes of Bruce Timm, excellent dialogue from animation scribe Paul Dini and incredible voice work from animated superhero legends, this is truly one of the great Batman animated movies. 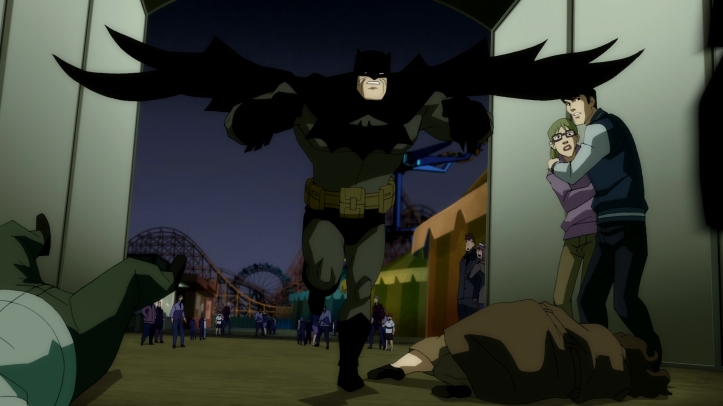 I am counting them as one film because if separated they would take the second and third spots on this list.  This is an animated adaption of one of the best batman stories ever told in the graphic novel medium, and Warner Bros animation has managed to create an equally great animated film.  Batman has to come out of an alcohol induced retirement to battle the evil forces threatening his beloved city.  Following the comic beat for beat, the movie presents a faithful adaptation of Frank Miller’s seminal work.  The animation reflects Miller’s art, but cleans it up for the animated medium. Any changes made to the story are done to keep it at a PG-13 rating or to make some of the sequences from the comic better serve a medium with motion.  Peter Weller is the definitive old Batman voice, even topping Kevin Conroy’s portrayal in Batman beyond.  Speaking of which… 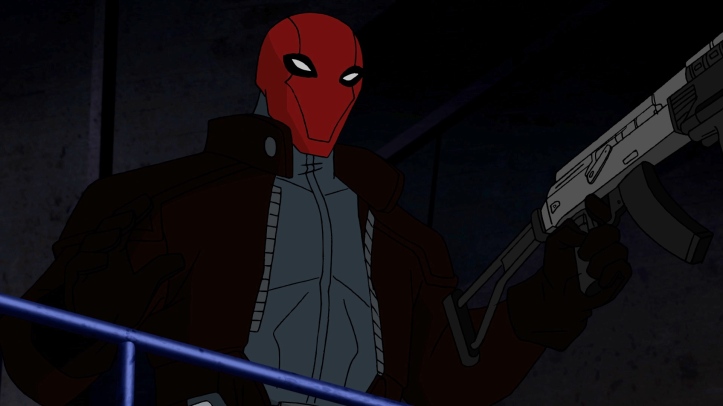 1. Batman: Under the Red Hood

Batman: Under the Red Hood, in my humble opinion, is the best Batman animated film ever produced to this day. Batman must battle legendary members of his rogues gallery whilst trying to uncover the identity of Gotham City’s new vigilante, the Red Hood. The film presents a powerful mystery that propels the plot (assuming you don’t read comic books), with a creative use of flashbacks that builds on character relationships.  The voice work is excellent, with each voice actor embodying the role they have been given.  The film also has fluid animation that makes for engaging action sequences, which this film is not short on.  This animated feature conveys some of the difficult choices Batman has had to make in his life, and how easy it can be to give into temptation.  Also, next to Mark Hamill, John DiMaggio is one of the best (and most underappreciated) animated Joker’s, being both cruel but undeniably funny

Do you agree with out list? What’s your favourite animated Batman film? Let us know in the comments and on social media and for all things in nerd culture and entertainment, keep it locked to Talkies Network!

Batman and Harley Quinn is set to be released in 2017