Samurai Jack was one of those cartoons I watched as a kid and though it was awesome at the time, I came to appreciate it even more as I got older.  So, when Cartoon Network announced a new season that would finally conclude Jack’s journey, I was excited and curious on what conclusion they would give Jack.  Several months, and ten great episodes of television later, my curiosity was satisfied.  Jack’s journey was brought to a heartwarming and action packed conclusion, with great twists and the return of several fan-favorite characters. 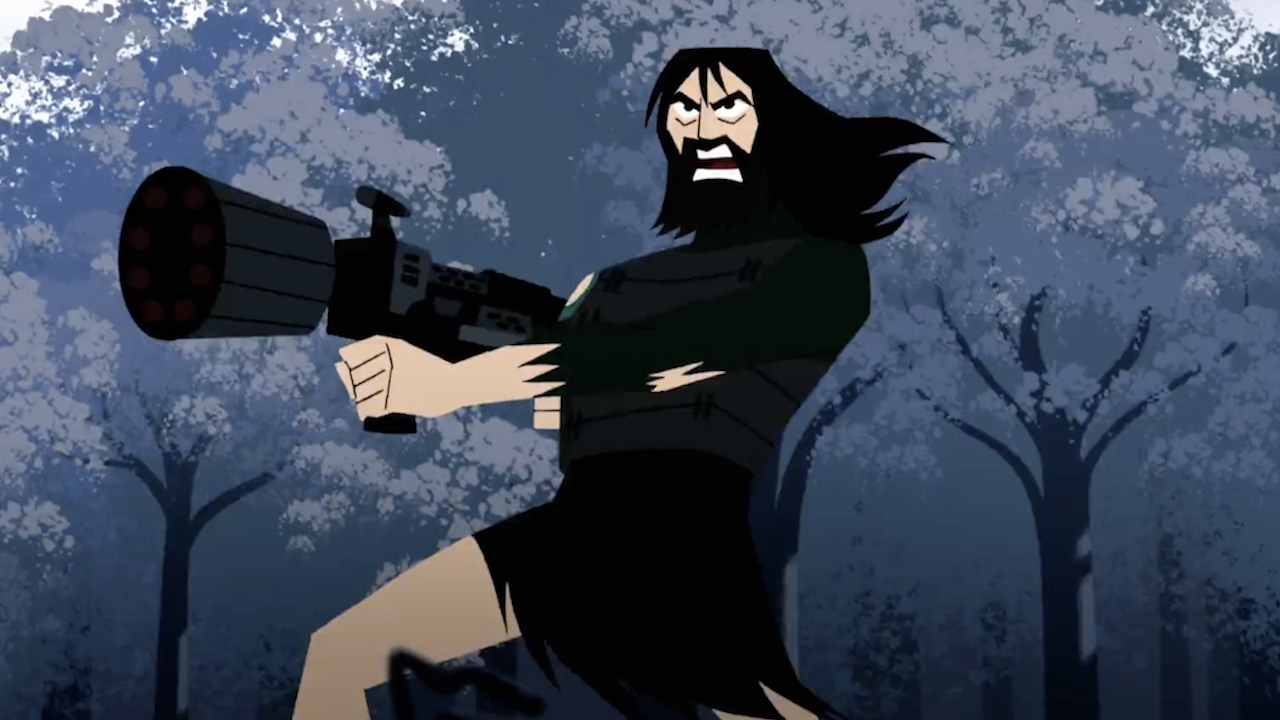 At the beginning of the season we find Jack, now with an overabundance of facial hair, continuing to battle the forces of the dreaded Aku.  However, Jack’s motivation for the fight has left him, as he has no way of returning to the past.  Fifty years after the original series ended, Jack finds himself without any hope of defeating Aku and saving his family. This is best signified by his choice of weaponry, with the loss of his sword causing him to finally take up fire-arms.  Frankly, Jack’s future seems bleak.

The fifth season marks a shift from the previous four seasons’ format in that the ten episodes tell one long, serialized story.  That being said, the shift isn’t too drastic as Jack is given a new threat to battle in each episode.  Jack spends the early episodes of the season battling the forces of Aku, before going on a quest to regain his legendary sword.  The final season set the tone for Jack’s final confrontation with Aku, and it payed off handsomely.

One of the best things about Samurai Jack’s fifth season was that it aired on adult swim, which allowed the creative team to explore more mature themes.  This in turn, allowed the series to age with the audience that first watched making for a great viewing experience.  In the original four seasons, Jack primarily fought robots, androids, and monsters because he could easily chop them up without a censor bitching at the creative team.  Now that the series was on adult swim, Jack could kill people, but rather than have Jack chop up armies of humans just because he could, the lack of killing in previous seasons was made a plot point.  Jack had never killed anyone before, so when he does, it means something.  It also shows how one can become desensitized to violence when it isn’t real, but once Jack sees that he has drawn blood, the violence becomes all too real for him.  Jack then thinks back to his past and recognizes that killing was necessary, but that it does take a tole on an individual.  The season’s main theme was exploring what happens when the hero’s journey is stalled and he has no immediate way to push forward.  The answer was, it gets dark, and things look bleak for Jack in those early episodes.  The series explores more of the culture Jack comes from, with Jack having now become a ronin due to his extended stay in the future.  Jack has failed his mission, and the answer to this would be honorable suicide, and it would also relieve Jack’s guilt at having failed his family.   Jack, with the help of Ashi, overcomes his guilt and sense of failure so that he may continue the fight.  Jack has become so consumed by his own failures that he has forgotten that his mission is important to more than just his family.

Despite the dark nature of fifth season’s story, Samurai Jack has always been a funny series.  The episodes focusing on Jack and Ashi had several humorous moments as it slowly built their relationship.  Jack’s awkwardness made for several fun scenes, and makes sens considering the more conservative era he originates from.   The villains, despite being pretty bad, tend to be the most hilarious part of this series.  Aku’s mock therapy session due to his state of mind (more on that later), is one of the best scenes from the season.  Another great scene was Aku’s confrontation with the Scotsman, which proved why the Scotsman is the best Samurai Jack character, aside from Jack himself.   It was these moments of levity that also remind us of what Jack’s fighting for, a less bleak and more optimistic future.

Ashi proves to be one of the best additions to Samurai Jack’s mythology. The daughters of Aku were one of the highlights this season, with their upbringing representing the darkness Aku has brought to the world.  They were raised away from love, kindness and hope.  They were instilled with fear and hatred, kept away from the outside world.  This all culminates in a heartbreaking scene when they see two deer show affection towards each other, and the daughters can’t understand it.  Ashi was the final person Jack saved with his good deeds, as he pulled her away from Aku’s evil, and showed her the extent of earth’s corruption.  Her redemption arc was another example of Jack representing hope in a world controlled by Aku, but as mentioned earlier, Ashi’s transformation showed Jack the importance of his mission. Her relationship with Jack was adorable, and felt deserved after all the shit he’s been put through by Aku over the years.  The characters had instant chemistry on screen, and their love story never felt forced, which made it all the more tragic when Jack learned that Ashi was literally the daughter of Aku.  Seeing Jack surrender when Ashi was forced by Aku to fight him was heartbreaking.  Throughout the season Jack faced a conflict between his own needs and the needs of everyone who existed or ever will exist.  His romance with Ashi played directly into this larger theme.  Luckily Ashi is there to help him do for the world what he did for her.

Now to mention the big bad of it all, Aku.  Aku didn’t appear to often in the series, but when he did it was important.  Villains are often at their best when they are reflections of the hero, and like Jack, Aku felt a lack of meaning in his life.  Without being able to finally rid himself of Jack, Aku has slumped into a depression, which was only alleviated when he believed he could finally kill Jack.  It added a human layer to a character who is supposed to represent the ultimate veil, making him a much more compelling antagonist.  The other thing about Aku is that he’s very over powered, so when he did show up on screen he dominated any conflict that he was a part of.  Making his appearances seldom allowed them writers to build up his threat going into the final battle of the season.  Mako, the original voice actor behind Aku, had died prior to the development of this season, so he has been replaced Greg Baldwin.  His portrayal of Aku is satisfactory, doing a good imitation of Mako.  However, Baldwin doesn’t bring the same comedic charm to Aku’s more humorous moments that Mako did.

One of the more notable additions to Jack’s stable of enemies this season was the Scaramouche, who proved to be an entertaining and fun antagonist.  His musical way of speaking and taunting of Jack during their battle added another great aspect to an excellently story boarded fight scene.  Even after he was defeated by Jack, his quest to return to Aku made for a humorous sub-plot across two episodes.  Seeing the situations Scaramouche’s head got himself into were great comedic breaks from Jack’s darker journey mid-way through the season.  It was a shame he had to go before the season ended, but that in itself made for a great bit of comedy, and irony.

The finale itself really feels like the culmination of both Jack and Aku’s stories.  In the end it turns out that Ashi has her father’s powers (a simple, yet slightly unexpected twist), and uses them to send Jack back to beginning of the series.  Aku being Aku, he gets in one last joke as he is befuddled by Jack returning to the past so quickly.  Jack killing Aku was the culmination of five seasons worth of story telling, but it wasn’t an even footed battle.  Instead Jack strikes down a weakened Aku who cannot defend himself, a fitting way to go considering how Aku himself took advantage of the weak an powerless.

This victory however, did not come without sacrifice, as Ashi (though later than expected) ceases to exist, since Aku was her father.  The fact that she left right before marrying Jack is even more heartbreaking.  Jack sacrificed himself to save the world, and people across time and space, as the adventure he embarked on was bigger than he was.  Jack’s melancholy is eased as the series comes to a close when he has this realization, as he takes in the beauty of the world now that it is free of Aku’s influence.

Throughout the ten episodes’ viewers are shown Jack’s allies from the first four seasons and they people his good deeds saved from Aku’s tyranny.  This continues the theme of Jack being hero of legend, as he has touched the lives of so many people over the last fifty odd years.  This is what culminates in them standing up to save the man who fought so hard for them in the past.  This allows for the return of some great characters like the Scotsman and the 300 (the guest stars of some of my favorite prior episodes).

The only thing not handled to perfection this season was the pacing of the season’s story.  The first five episodes build up a lot of momentum, which does go away as the series starts to focus on Jack and Ashi’s relationship.  While the episodes are still great, it would have been better for the main narrative of the season to continue without any one-off stories, due to the shorter episode count.  The final conflict with Aku was saved for the last episode, even thought something so significant should have been given a little more room to breathe.  That being said, even though the season’s final act felt a little rushed, it allowed for Jack and Ashi’s relationship to develop in an organic way.  I’d rather have the final battle feel rushed, especially since they pulled it off quite well, because their relationship is important to the series’ ending.  It would not have been as effective if the romance felt rushed and contrived.

The thing that made Samurai Jack stand out among-st other action cartoons was that the story telling relied heavily on visuals.  With minimal dialogue, the stories were told through body movement, expression and fluid action sequences.  Despite a change in working methods, the series maintains it’s distinctive look and feel.  The backgrounds are exquisite textured paintings, and the character designs make for fluid motion in the actin sequences.

Samurai Jack’s fifth and last season concludes the protagonists story at a high point, with all the emotional and action beats fans would expect.

What are your thoughts on the final season of Samurai Jack? Comment below and on social media and for all things in entertainment and nerd culture, keep it locked on Talkies Network!