7 Predictions for ‘Game of Thrones’ Season 7

With Game of Thrones premiering a new trailer, and season 7 airing on July 16, 2017, I thought it would be a great time to make a bunch of predictions for the upcoming season. This list will contain a score (1-10) 1 being, a “prediction that will never happen” and 10 being, “a foregone conclusion.” These are fan theories that could end being right. For example, many fan theories have been some level correct in the past. Based on that it is possible for the following theories to share the same fate. READ THESE AT YOUR CAUTION or maybe I’m just an idiot that doesn’t know anything. Probably, the latter.

1. Bran will warg into a dragon

Admittedly this isn’t a predication but more of a cool idea that writers could use. Bran has the ability to warg in animals and humans (as shown by Hodor) so what would be stopping him from warging into a mystical beast. Bran could warg himself into a dragon a burn a significant amount of the white walker army.

2. Bran is the reason why the Mad King is MAD

Bran’s whispers are what drive the Mad King Aerys to madness. As anyone knowledgeable on Westeros lore knows, the campaign to dispose of the Targaryens began when he killed Ned Stark’s father and brother, Rickard and Brandon, with fire. Aerys was known for repeatedly saying “burn them all.” According to the theory, the reason why Aerys keeps repeating that phrase is because Bran traveled back in time and tried to warn him of the approaching White Walkers. Instead, the whispers only heightened Aerys’ already uncontrollable paranoia, leading him to kill the Starks and start the cycle of warfare that still continues in Westeros. Let’s be honest, Bran is known to be a fuck up, so this could happen. In addition, Aerys appeared for the first time in a series of flashbacks in Season 6 Episodes. Could have this appearance foreshadow what is come?

With the death of Tommen, Maggy the Frog’s prediction that all of Cersei’s children will die has come true. However, there’s one more tidbit that concludes the childhood prophecy: Cersei will be killed by her little brother. People thought that to be Tyrion, who’s currently en route with Dany’s army. However, he’s not Cersei’s only little brother. Jaime, Cersei’s twin, was born a few minutes after her. The last time we saw Jaime, he was horrified, watching Cersei take the crown. He is not happy with the direction the kingdom and his family are taking. Even though Jaime has said time and time again that Cersei is the most important thing in his life that may be tested if someone else in his life is threatened, such as Brienne of Tarth, or even the Stark sisters (who he’s sworn to protect). And, given Jaime’s reputation as the Kingslayer, it would be heartbreakingly poetic justice to have Jaime kill the Mad Queen, too. Also, we have to keep in mind that Jamie specifically killed the “Mad” King precisely for what Cersei just did to the Red Keep. This is theory that I think is most plausible to happen.

4. Tyrion Lannister is a Targaryen

Jon Snow isn’t the only Targaryen around. Tyrion Lannister is also believed to be one of the prophesied heads of the dragon along with Dany and Jon. It comes from the theory that mad King Aerys Targaryen had an affair with Tywin Lannister’s wife, Joanna, the mother of Tyrion, which might explain why Tywin hated him so much. And despite what happens in the books, the TV show is pointing in that direction, with Tywin saying you’re no son of mine just before Tyrion shoots him with an arrow. Although this could just be part of Tywin’s constant rejection of Tyrion’s suitability as a Lannister, it’s something that’s alluded to again and again throughout the first four seasons. This theory actually has weight to it. For example Tyrion is shown to be able to talk to Dany’s dragons when he removed their chains. Is this possible maybe? If this is true it could be a bad idea on the part of show. Postioning a character as the only reason to actually like the Lannister family only to have it be a swerve could prove to either be an incredible story or garner a negative response from fans.  Nevertheless, from a narrative stand point it could interesting to watch. 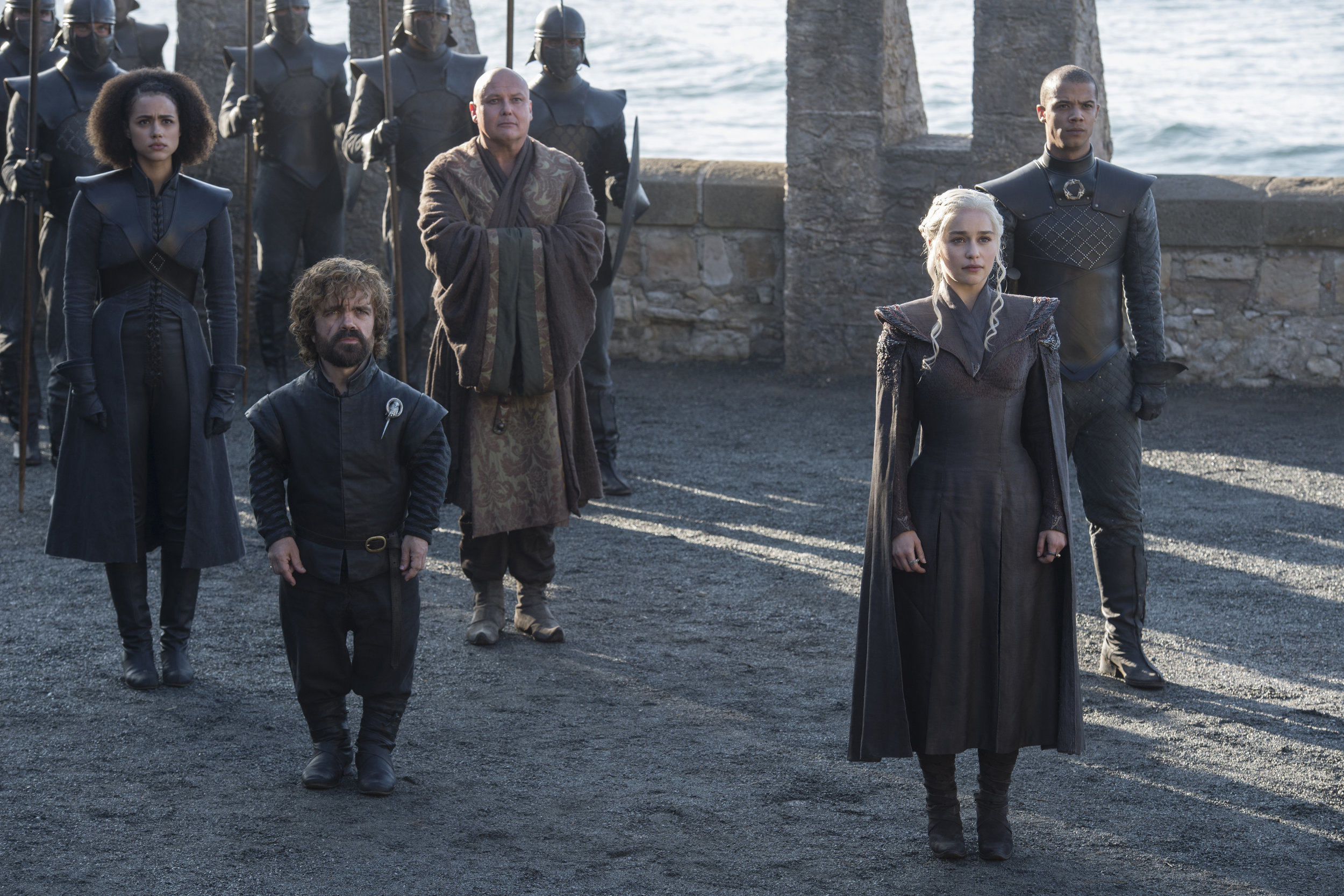 5. Euron Greyjoy will control a dragon

Euron Greyjoy is an interesting character. Theon and Yara have teamed up with the Mother of Dragons, but leaked set photos from the filming of season 7 suggest that Euron allies with Cersei, so he’s very much in the game.  I think he’s going to be the source of Dany’s first major Westeros battle, and it’s not going to be pretty. For starters, Euron is a seafaring man, while most of Dany’s army has little experience on the ocean. Second, there’s that horn. In the books, Euron Greyjoy acquired a horn called Dragonbinder while searching the ruins of Old Valyria. He claims it can be used to control a dragon, but it hasn’t been tested. We haven’t seen Euron with Dragonbinder in the series so far, but he could surprise Dany and her army. If someone used one of her own dragons against her it would be devastating for Dany. This could provide another level of chaos to an already insane series.

6. Greyscale will be used as a biological weapon

If Jorah succeeds in finding a cure for greyscale, that means Daenerys would have a weapon more powerful than any army: a disease. Daenerys could threaten Westeros with a greyscale epidemic, therefore ensuring that more people would side with her without spilling any blood. However, if Dany ended up having to use the greyscale, even if she and her supporters were protected, it could come with a catch. Throughout the events of the series we have seen multiple styles of warfare, but the one yet to be seen is biological warfare.

For those who don’t know, Bran The Builder was the man who created Winterfell and raised The Wall over 8000 years before the events covered in Game of Thrones. There’s belief that our Bran and the former Bran are one in the same person because of his ability to influence the past. We already know Bran can see into the past and future, and he can influence events and ‘warg’ into people. Every GOT fan remembers “Hold the door.” If he’s aware of the White Walkers in the present day, maybe it’s his responsibility to travel into the past and raise The Wall to keep them out. Also, in the books, Old Nan mentions – on several occasions – that Bran’s favourite stories are the ones about… yup, Bran The Builder.

These theories are great and it’d be amazing to see them but if they don’t, I know the writers will make something either as or more awesome. Are there any theories I missed, that are worth a mention? Late me know on the comment down below and for all things in entertainment and nerd culture, keep it locked on Talkies Network.