Castlevania, which is a well-known Konami game franchise, has been adapted into a very enjoyable four-episode season of television on Netflix.  Now as I write this review I must make it clear, I know absolutely nothing about these games, with my only exposure to the franchise prior to this cartoon being the ‘Crasher-Vania’ song by Starbomb.  That being said I am a huge fan of Warren Ellis, who wrote all four episodes, and was eagerly awaiting its arrival on Netflix.  Now that it’s here and I’ve binged the whole thing, it’s time to review.

The first season focuses on Dracula’s revenge against humanity for the death of his wife, and the return of a fallen hero, Trevor Belmont.  The first season mainly takes place in one location, but is very character driven and features some incredible visuals.

The web-series avoids simple concepts of good and evil, as many of the characters and institutions in the series exist in moral ambiguity.  The Church is presented as a corrupt institution, who’s members have their own agendas and who seek to manipulate the people to their own ends.  They want to scapegoat a group of people do as to put the populace at ease, which is a very relevant theme.  The Belmont’s and Speakers are excommunicated for consorting with the supernatural, with the Church foolishly assuming all of it to be evil.  This over-generalization of things is what the series seeks to address, which is why I wish Alucard (Dracula’s human friendly son), had a bigger role in the first season.  The series main conflict is a direct result of this persecution, showing the consequences that come from this ignorant attitude.  This adds depth to the background characters as well, as their journey this season is about rising above blindly following authority figures.  There is some hints of class conflict, but the initial four episodes don’t explore much of it.  It mainly occurs in one scene, but it was interesting so hopefully season 2 will explore it further. 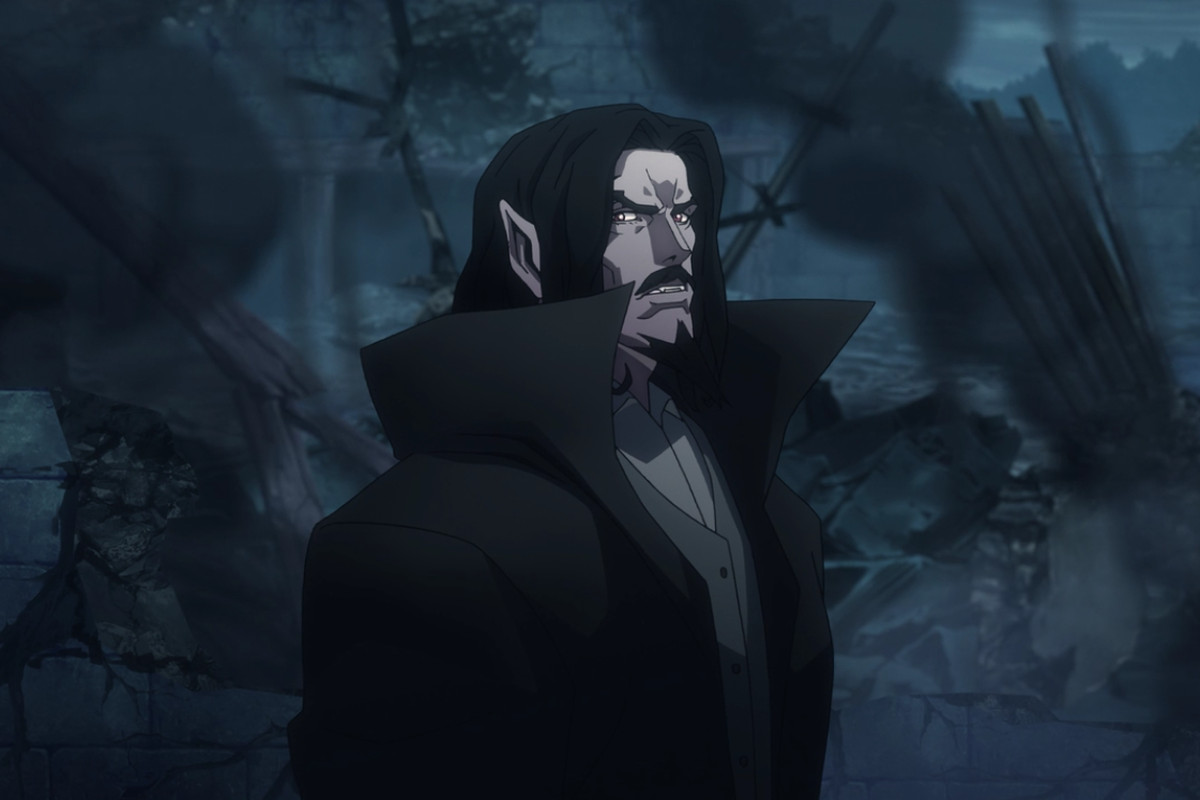 The series’ larger villain is Dracula, who is given compelling character motivation as his reasons for trying to destroy humanity come from personal loss.  Rather than being evil because he’s a vampire, Dracula has a genuine reason for hating humans, and it’s easy to understand why he’s attacking humanity, even though you may not agree with it.  Dracula doesn’t show up all that often in the four episodes, but this adds to the realism of the series.  The character featured in the early episodes are very removed from the larger scope of Dracula’s revenge, so it makes sense for him not to be present very much in the first season.  The first season’s primary antagonist is the Bishop of the church, who is so blandly evil that when he does get his comeuppance, I don’t really care.  The Bishop has no development beyond a larger scheme for a power grab within the church.  He’s really just an power hungry and un-remorseful asshole.  The Bishop’s just not that interesting, and it’s a shame he takes the primary villain role this season.

A majority of the characters aren’t given a lot of attention in the first season, but much of the four episodes focus’s on Trevor Belmont’s journey.  Belmont’s story is a well known trope, the hero who has given up finding a reason to fight again, but it works well with the story’s themes.  Trevor was a victim of the Church’S injustice, much like Dracula, but he chooses to fight his battles a better way.  Castlevania is incredibly well-written, with witty and natural sounding dialogue.  Ellis’ other writing are known for his well written dialogue, making the most mundane of conversation seem incredibly interesting, and he bring it to these scripts.  Trevor’s dialogue is sarcastic, very observant and makes for the season’s most entertaining moments.

The series features some great voice acting, particularly by Richard Armitage.  His voice-work for Trevor Belmont is great, conveying the character’s initial aimlessness quite well.  McTavish’s voice work for Dracula is one of the show’s highlights, with the actor giving Dracula a commanding presence when he appears on screen.  Matt Frewer’s depiction of the Bishop is sinister and well acted, so it’s a shame that the character lacks any real depth. 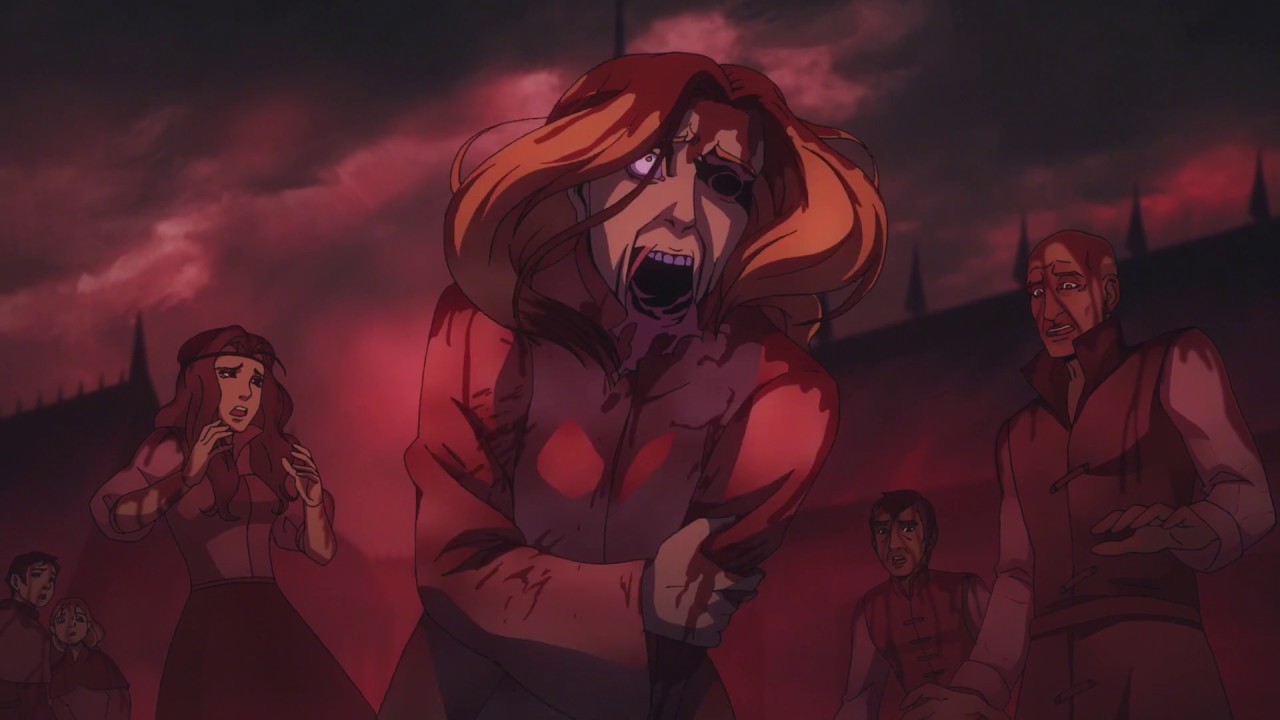 This series is clearly anime influenced and boasts some impressive visuals.  The backgrounds are beautifully rendered and the shots of Dracula’s castle are great, though I wish we’d see more of it.  The fight sequences are also well choreographed,  and incredibly gory.  This series does not shy away from violence or it’s R-rating, but the gore never seems to be in excess.  Considering the gravity of the situation facing the characters, the gore of the action scenes really sells the peril they are in and the carnage that Dracula’s hordes can inflict.  The violent nature of the show also makes for some great comedic moments with Trevor.

Castlevania’s first season was action packed, featured mostly interesting characters and carried with it relevant themes.  I’d highly recommend watching it, and with only four episodes, it’s an easy binge.

What did you think of Castlevania’s first season?  Leave your thoughts in the comments.