War for the Planet of the Apes Review

Trilogies that are consistently good might just be the rarest thing in cinema history. Every now and again however, we get a trilogy in the vein of the original Star Wars trilogy and The Dark Knight trilogy. This, is one of those times. I don’t think anyone saw a rebooted Planet of the Apes trilogy coming, let alone being an incredible one. War for the Planet of the Apes concludes the story that began with Rise of the Planet of the Apes and continued with Dawn of the Planet of the Apes. Matt Reeves is back in the director’s chair and naturally, it was expected that the third film in this franchise would be underwhelming. Is it? Absolutely not. War is not only even better than the two films that can before it, it is a phenomenal film that brings a satisfying conclusion to Caesar’s story.

Set two years after Dawn, War follows Caesar in the middle of an all-out war between his ape colony and a platoon of human soldiers led by a ruthless and vicious colonel who plans on making one final stand against the enhanced apes. With little time, Caesar and company find a sanctuary where they can live in peace but after tragedy strikes, Caesar is forced to wrestle with the darker instincts he has tried to fight off and begins his own quest for vengeance. As his journey brings him and the Colonel face to face, their respective sides enter into an epic battle that will determine the fate of both ape and humankind and the future of Earth.

It has finally happened once again. The third film in a trilogy is not a dud. It’s simple really. War for the Planet of the Apes is undeniably spectacular. From start to finish this film never lets up. The first thing that probably comes to mind when this series is brought up is the astounding visual effects work.  The motion capture performances in this film were among the best ever.  Weta Digital, the studio tasked with constructing the ape animation has produced some of the most life like CGI ever seen on film.  Whether it’s the apes riding on horses or a large group of primates gathered together in one location, the visual effects are ambitious but also extremely seamless.  But remember, motion capture is nothing without the actors performing.

What should come as no surprise at all is that the entire mo-cap cast is fantastic.  Andy Serkis, Terry Notary and Karin Konoval, who star as Caesar, Rocket and Maurice respectively, are the clear standouts in the film.  The apes show a real sense of brotherhood and it’s all conveyed through facial expressions and minimal dialogue.  Caesar is a complex and flawed hero and leader, haunted by the violence that continuously follows him.  Serkis has played the role of Caesar since 2011 but in each of the three films, the performance always feels fresh and new.  The Caesar we see in War is not the same one we saw in the past two films.  He is angry, old, and vengeful but still seeks to protect his kind.  He is struggling with his moral compass after a gruelling two year battle.  That’s where Rocket and Maurice come in; to ground Caesar and keep him from doing something he’ll regret.   Then we have Steve Zahn as the comedic relief for the film, Bad Ape.  Make no mistake, this film is dark and bleak and a character like Bad Ape might seem out of place.  But Reeves and co use him just the right amount, giving him the funniest lines in the film and having be integral to the plot.

What separates this film from Rise and Dawn is its use of human characters. The previous two films more or less gave apes and humans equal screen time, but War is almost exclusively an ape film.  Now, does that mean that the humans in this film are useless and shouldn’t even be there? One hundred percent no. War may have an ape in every scene, but the humans in this film are stellar and it’s all thanks to the superb performances.  Woody Harrelson plays the sadistic Colonel that Caesar has been fighting and he gives it his all in the role.  Not only is he terrifying to watch, his character arc makes for a great villain.  At times, you understand why he’s the way he is and sympathize with him, but then, in an instant, you are right back to hating every ounce of The Colonel.  Newcomer Amiah Miller plays the main human ally to the apes, Nova, which is a callback to the original 1968 Planet of the Apes film.  She is a mute orphan and is found by Maurice who adopts her as his daughter.  She brings innocence and bravery to the role as Nova and carries some much needed light to Caesar’s dark world.

Matt Reeves truly did a phenomenal job directing this feature.  War allowed him to not only direct, but co-write the film and it’s clear that he knows how to tell an emotional story that keeps you on the edge of your seat.  He beautifully incorporates wonderful visuals, a thunderous score, incredible dialogue and jaw dropping action sequences.  What Reeves does so well is broaden the scope of the universe he help build.  By using the character of Bad Ape, Reeves has confirmed that Caesar’s apes aren’t the only ones who have evolved past a primitive nature.  He gets the very most out of every little aspect of this post-apocalyptic world and it makes for an awe-inspiring film. 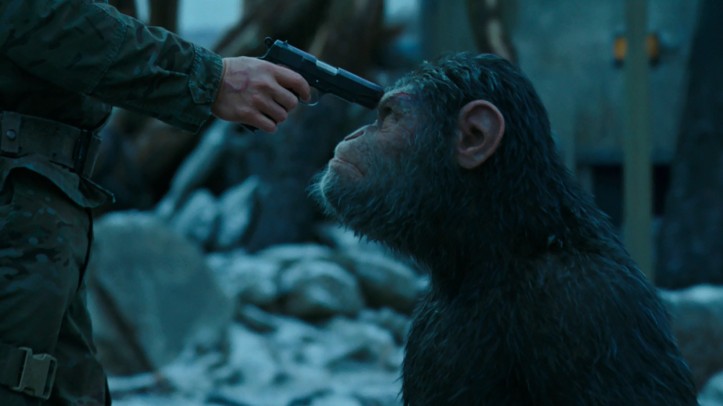 Now, despite the title having War in it, don’t expect this film to be like a Mad Max film where it’s action from beginning to end.  The war in this film is more about Caesar’s internal struggle to not become like the ape he despise the most, Koba.  Koba was the main antagonist in Dawn and his utter hatred for humanity is what inadvertently kick-started the war.  Caesar tries desperately not to follow the same path and watching him fight himself was one of the best parts of War. This doesn’t mean there wasn’t action however. There was, and it was stupendous.

The film opens with a Saving Private Ryan style of warfare as the prologue sees a group of human soldiers attack an ape hideout and it’s one of the most action-packed sequences of the year.  Again I must mention the visuals as the amount of apes that were present during this sequence and the amount of realism it had was unbelievable.  The third act has the big action scene where its human vs soldiers in one final battle and, to put it simply, I was left speechless.

I do have a couple of minor gripes for War.  This isn’t a spoiler but for part of the film, whenever Caesar is asked a question, his immediate response is “I don’t know.” He says this quite a few times in the first act and after a while, it just got annoying. Caesar is one of the few apes who can speak in full sentences; give him something else to say besides “I don’t know.” Additionally, I would have wanted more Woody Harrelson in the film, merely because his performance was just that good. I understand that this was Caesar’s story, but it would have been nice to spend a few extra moments with the man trying to save humanity.

Similar to the past two films, War is a beautifully shot film as it incorporates new landscapes and settings.  The film moves away from the forest and San Francisco and it was refreshing to enter new terrains unknown to the apes.  The snow covered mountains, the desert paradise and the apes’ water-fall hideaway were all captured beautifully by cinematographer Michael Seresin.

Michael Giacchino is back to compose the music for War and it is all kinds of awesome.  Giacchino is slowly but surely becoming the best composer working today.  He delivers an engrossing and thunderous score that goes hand-in-hand with the stunning images on screen.  At times, there is no one talking and Giacchino’s score is there to help viewers understand what is going on in the minds of the sign-language apes. 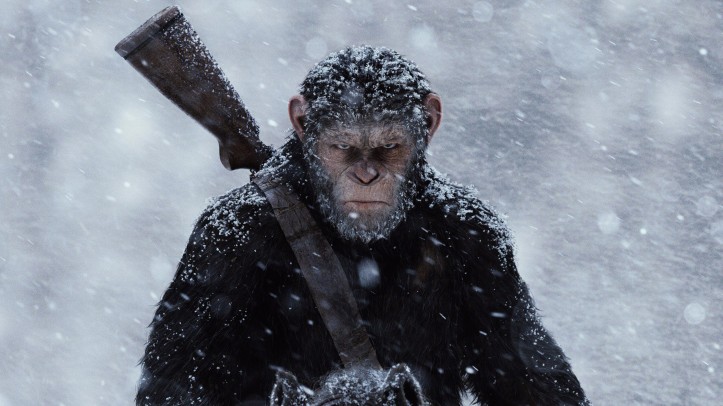 What did you think of War for the Planet of the Apes? Sound off in the comments and on social media and for all things in entertainment and nerd culture, keep it locked on Talkies Network!