Doomsday Clock follows up it’s debut issue with a worthy contender, as it builds a foundation for Johns’ and Frank’s epic in the making.

The second issue continues Veidt’s plan to find Doctor Manhattan, as the Watchmen characters use Nite-owl’s ship to venture into a quantum tunnel.  This allows our protagonists to venture into the DC Universe, or more specifically Prime Earth.  Once they land in Gotham, Rorschach and Veidt begin inter-acting with the DC universe, and the results are interesting.

Geoff Johns continues to prove that he is the ideal person to write this story, as his approach to Doomsday Clock provides the story with far more depth than most DC event series.  Johns follows the slow and methodical structure of Moore’s seminal work, which allows him to better flesh out the principle characters when compared to smaller event series like Final Crisis and Infinite Crisis.  It’s good that John’s builds up the Watchmen characters and uses their motivations to drive the larger story.  It also provides a viechle through which the reader can gain access to the larger story, as the Watchmen characters begin interacting with the DC Universe.  This makes this large story feel intimate, and avoids quickly cramming in the entire DC pantheon into the introductory issues.  This makes for a slower paced, but far more interesting story.

Despite not yet having the two central characters meet, or even feature in the issue in the case of Superman, Johns is already beginning to establish the ideological conflict through the supporting players.   The introduction of the ‘Superman Conspiracy’, brings the DC Universe ever closer to Watchmen, with the protesting Gothamites echoing the protests seen in the beginning of the first issue.  The DC Universe seems to be moving closer to the cynical world of Watchmen as the people are losing faith in their heroes due to larger political agendas.  Conversely Veidt seems to be seeking some of the heroism that the DC superheroes are supposed to represent, though he continues to do so through underhanded means.  I found it odd that he’d continue to where his superhero costume in this series, but it makes sense.  Much like in Watchmen, he believes himself to be the hero of this story and dresses as such.  Pairing with Luthor is also an interesting choice, as neither see themselves as the villain, and that therefore their actions are justified due to their intended end goals.

The flashback with Marionette showcases Manhattan’s humanity, something that he’s lost and is a part of the ideological battle between Jon and Superman.  This glimpse of humanity, and Veidt’s theories as to what Manhattan’s been doing in the DCU, provides different theories as to why Manhattan is messing around on Prime Earth.  Hopefully this build up, aided by a lack of Manhattan’s presence in the story, will pay off further into the series.

Marriotnette and the Mime also provide a different perspective in the series, as they are outsiders with little inside knowledge about the events of Watchmen. They also work as an example of cynicism in comics, since their criminal identities were inspired bu the surge of costumed adventures in the Watchmen universe.  Beyond any deeper meaning, the two characters are also very entertaining and their role in the story is made more interesting as they are involvedso as to gain their son back. 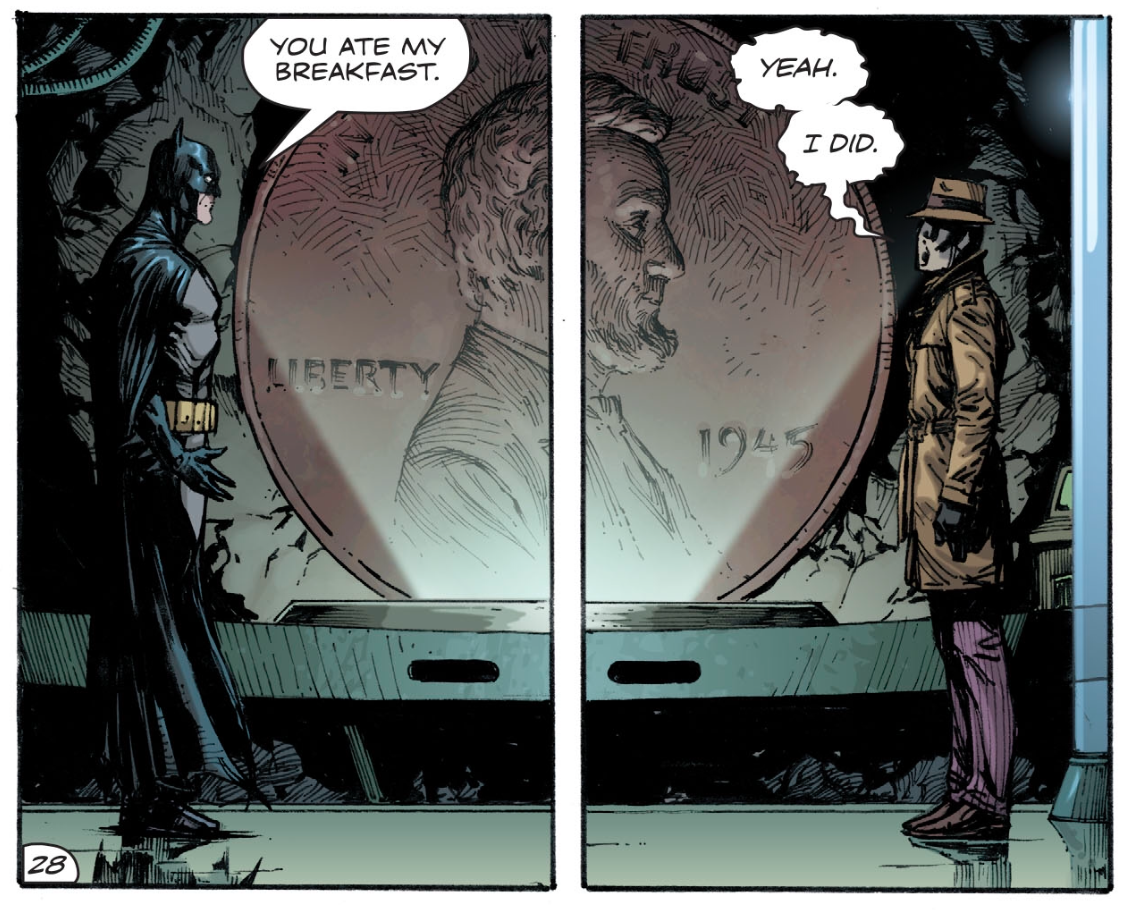 The growing hints as to the new Rorschach’s identity in these last two issues has made me interested in whether his identity will connect to another Watchmen character. So far two things have been revealed about the character, besides a love of pancakes, so this character’s identity and motivations for working with Veidt will make up one of the series long running mysteries.  The Rorschach test sequence with Bruce is present for one panel in the issue’s last page, so Johns may be hinting at a certain plot thread of the original Watchmen storyline.  This is coupled with the reverence that Rorschach II seems to hold for his predecessor, as shown in his observations of the trophy area of the Bat-cave.  The Rorschach test being performed on Bruce is an interesting callback to the original series, with Kovacs being designed as Batman if he were real (so pretty fucking damaged).

The meeting of Batman and Rorschach in the Batcave seems to be the beginning of the Rebirth plot threads sinking up with Veidt’s mission to find Manhattan.  The cork board that Rorschach looks at is filled with news clippings related to the Joker, which may indicate that Johns’ mini-series is picking up this plot thread from Darkseid War. The three Jokers mystery is most likely connected to Doctor Manhattan’s meddling with the DC Universe.

Gary Frank proves to be a worthy successor to Gibbons, as his art captures the world of Watchmen and the DC Universe, even as they come together.  The standout aspect of Frank’s artwork is his ability to render facial expressions that bring the characters to life, which compliments John’s approach to the pacing of Doomsday Clock.  The colouring work of Brad Anderson is effective in showcasing how close to the world of Watchmen earth prime is becoming, with the protesters outside of Wayne Enterprises being colored in the palate used for Watchmen.

Much like the first issue, this comic features backmatter that provides more information about the ‘Superman Conspiracy’, which means there is no exposition dump about the subject within the story.  It also provides some clues at to the whereabouts of missing heroes, an essential component to the Rebirth mystery.  Over-all it adds to the story Johns’ is writing, and the continued variety of how the backmatter is presented is always enjoyed.

The series’ second issue continues to slowly build to the larger aspects of the cross-over, but this approach allows us to get invested in each character’s personal arc along the way.  Combined with a growing number of mysteries and gorgeous artwork, Doomsday Clock is shaping up to be something truly special.

What did you think of Doomsday Clock’s second issue? Leave your thoughts in the comments folks.