Happy New Year! 2017 has come and gone and with the new year, comes a lot of new television shows, seasons, rumors and so much more. Before all that happens however, we thought that we’d look back at the best television had to offer this past year. Frankly, there are so many shows on T.V that it’s almost impossible to watch everything. That being said, it is clear that most of what we see on T.V is not even worth changing the channel to. The ten shows you will read about here will be, in our opinion, the shows that can stand the test of time. The one’s that will be remembered as small screen classics and with this in mind, Talkies Network’s presents the ten best television shows of 2017!

Brooklyn Nine-Nine may have not had a full season in 2017 but the first ten episodes of season five proved to be better than most full seasons of television shows. Led by the always effective pairing of Andy Samberg, Andre Braugher along with the rest of the ensemble cast, Brooklyn Nine-Nine remains as one of the most charmingly written sitcoms on network T.V. At its core, the series is at its best when it revolves around the heart its centre, which is converging on the relationships and innermost workings of its charismatic characters and the first half of season five perfectly exemplifies this.

Silicon Valley’s fourth season sought to re-invent the formula for success and became more thoughtful and ambitious at the same time. By focusing on Richard becoming a stubborn stick-in-the-mud, and the rest of the house turning against him, Silicon Valley set up dramatic storylines in this hilarious series that were surprisingly compelling.  The veteran comedy advances the overall series arc while still adding new wrinkles for the characters to experience, delivering tons of laughs to remain fresh in viewers’ minds.

If we are being completely honest here, I found myself at a loss when I was reading many of the reviews for this show. Overall, The Punisher is a slow but marvellous series that gives fans The Punisher we have all been waiting to see while still having an entertaining and challenging story. It features lifelike and phenomenal action scenes but also deals with real issues plaguing the world today. It is a return to form for Marvel’s Netflix side of the cinematic universe and is one of Marvel’s best television efforts yet. Much like Spider-Man, The Punisher is home and he is out for violent justice.

Visually stunning, incredibly complex and enticing, Legion is a brilliantly daring departure from the traditional superhero television series format. Led by a phenomenal performance from Dan Stevens as the titular damaged mutant and backed by the fantastic writing style of Fargo’s Noah Hawley, Legion attempts to blow your mind with every single episode as it spends less time on world-building and more so on the journey of its characters. It is a comic book show that appeals to both die-hard X-Men fans along with the general audience and shattered every expectation put in front of it.

Black Mirror may be the most depressing show on this list but that doesn’t mean it is not one of the greatest. The latest season was able to terrify the fan base with technology that has become integral to our daily lives and take on a different, more unique tone that may feel unfamiliar at first but will prove to be as good as or even better than previous seasons. Black Mirror keeps finding new and exciting ways to tell its bleak narratives and delivers a gorgeous, beautifully written and horrific season four. 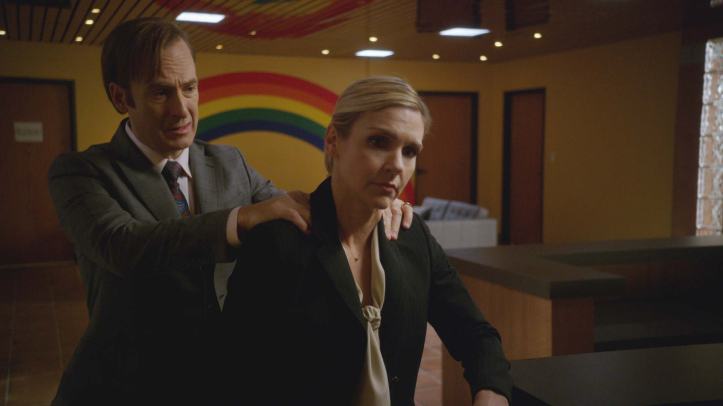 Better Call Saul, the prequel/spin-off to arguably the greatest television show ever, Breaking Bad, is the most underrated entry on this list. With its slow-and-steady pace and no sign of slipping, Better Call Saul managed to keep its protagonist’s story fresh and balance the introduction of several familiar faces from the show’s universe. Season three showcased the beginning of Gus Fring’s relationship with Mike and perfectly executed Jimmy’s descent into the criminal realm under his new “identity,” Saul Goodman. It oozes charisma and has fully hit its stride. Better Call Saul has earned its place beside its phenomenal predecessor.

The lone animated entry on this list, Rick and Morty’s highly anticipated third season delivered on all fronts. In a show where literally anything is possible, the Adult Swim comedy is propelled by its clever writing, ambitious world-building, hilarious philosophy and went on to become the wildest show of the year. What makes this latest season so entertaining was how aware it became of the cost of the madness caused by its characters. The stakes are real and Rick and Morty wants fans to know it. Weird inventions, cosmic mishaps and grounded characters made this season of Rick and Morty the best animated outing for the television series in 2017.

In its sophomore season, Stranger Things once again proved why it is a force to be reckoned with. Balancing moments of humor, nostalgia and a truly horrifying and exciting story, the show stepped up the pace without losing grip of what made the first season special, succeeding on almost every front. Stranger Things 2 continues to use the series’ unmistakable style, and boasts wonderful performances, a captivating musical score, and beautiful cinematography. It’s fun, weird and just as delightful as season one, and will have fans craving more for days to come.

In its biggest season ever, Game of Thrones returned to the small screen to remind fans why it is great in every aspect. Resolving some of the shows biggest issues and questions along with boasting some of the best performances the show has ever seen, Game of Thrones roared back in a big way. Even with a reduced episode count, the show proved to benefit from it as the season was home to a more focused and powerful form of storytelling, leaving fans more conflicted and elated than ever. Beautiful backdrops, a wonderful musical score and an emphasis on female characters led this season of Game of Thrones to be one of its most engaging ever. How long do we have to wait again for season eight?

What. A. Series. No show this year proved to be as unique and awe-inspiring as American Gods. From its first episode on, the series only got weirder and more visually dazzling from there. The show opens with several ambitious storylines and through its first season run, rewards viewers with a rich narrative that demands to be seen on the nicest and biggest screen in your house. With Ian McShane and Ricky Whittle leading the charge on the cast front and Bryan Fuller and Michael Green superbly bringing Neil Gaiman’s classic vision to life, American Gods is so spectacular and outrageous that you will instantly become enamoured with its beauty and is our definitive pick for the best television show of 2017.

Honourable Mentions: The Handmaid’s Tale, The Good Place, Mindhunter, 13 Reasons Why, This is Us, The Crown & The Gifted.

That’s our list! Hate it? Let us know what your favourite television show of 2017 was in the comments and on social media!