**Warning: this post contains spoilers for Season 9 Episode 1 of Archer: Danger Island – read at your own risk**

Someone better call Kenny Loggins because we are about to enter the DANGER ZONE!

Yes, after a long year of waiting the gang is finally back together on the small screen, giving us another season of laughs, straight-to-Google references, and for a lack of a better word… more Archer. As with the previous two seasons, Archer distances itself from the world of secret service and is placed in a fantastically crafted and tantalizing new world filled with countless possibilities. Moving away from the 1980s Miami Vice theme of two seasons ago (speaking of Vice, this writers favourite NBA jersey has to be the Miami Heat Vice jersey… even though he is a Raptors fan… bring back the purple VC jerseys!), and last season’s Dreamland set in 1970s LA, season 9 (brilliantly titled Danger Island) takes another step back in time and ends up in 1939 vis-à-vis a Casablanca era. This time, the setting is the small (dangerous) island of Mitimotu in French Polynesia.

Before watching the first episode, I was curious to see how the showrunners were going to balance the new diegetic world and its personas with the old but trusted dynamics the carried the show so far. After watching the first episode, it is safe to say that the heart of what makes Archer the show that we have all grown to admire is still very present regardless of the cornucopia of reinventions. The core dynamic and banter between the cast is (again) one of the highlights of the episode, along with the continual presence of numerous jokes and learned references that Archer fans have grown to love over the past 8 seasons. Along with the the amazing voice talent, this episode has a distinct Archer feel to it. However, there is still a Gordon Ramsay sized  pinch of ‘new’ aspects that are present in this season. One of the more noticeable changes from previous Archer seasons is the different personas assigned to the core cast as seen below. Personas are meticulously crafted masks that exists separately from originals. Personas also serve as a kind of buffers between fiction and reality. With this newfound freedom, the show runners are given the chance to explore and create without any limitations, fears, or hindrances.

A semi-functioning alcoholic seaplane pilot with his left eye missing. His character serves as a callback to a previous character on the show: Rip Riley (S03.1-3). Even Sterling’s seaplane (Loose Goose) is named after Rip’s own seaplane (Old Loosey Goosey). We begin the episode with Archer, drunk, having just slept with a newlywed… Classic. So nope, nothing really changed (that we can see so far…). It would have been interesting to see his name changed, possibly to something along the lines of Rando or Randy. Or even Bob! Wait no… they already did that episode.

A very tall and broad shouldered Pam is seen in this new season (similar to cocaine Pam) as Sterling’s co-pilot. She is portrayed as very loyal to Sterling despite the abuse hurled at her, especially during the flight scene. Poovey, as far as we can see, is basically a badass. Again, her character is yet to be developed but I am hoping for her to grow into a flushed out character.

Lana playing the love interest of Archer but doesn’t want him? Where have we seen this before? Oh right… She is travelling with a German… for unknown reasons… probably something to do with an impeding war as we are set in 1939. In the first episode, the audience is not treated to any real character building nor any insight as to who the ‘real’ princess is. The only thing that we really see is a character that has a very condescending and superior air around her. Hopefully the next few episodes will flesh out this character into a dynamic member of the stranded group. In other words, we are waiting for her to turn into Lana.

For this season, Cyril plays a German who is interested in establishing a bread-fruit plantation on the island and then exporting it. But… no one is really buying this excuse *cough* spy *cough*. Also… that last name is a thing of beauty… poor old Jerry Smith always being the butt of the joke. Similar to Lana’s character, this character is not fully developed and will probably be similar to the Cyril of the past. Only time will tell.

Newlywed New York Socialite Charlotte makes the unfortunate mistake of sleeping with Archer… on her honeymoon (recurring motif). Having been caught by her husband, she is left abandoned in the hotel bar with no way of leaving the dangerous island. Most of her character traits are left unchanged (which I am absolutely okay with). Again, I cannot wait to see how this character will be used.

Krieger has always been my favourite character so it was interesting to see him being transformed into a talking Macaw. I LOVE it. Straight off the bat, the show runners made sure to clearly develop the character and inform the audience that he is understood by all (unlike other animals or babies in a certain show ). Just remember: “don’t make a big deal out of it”. Less of a mad (but awesome) scientist, this bird will (hopefully) serve as the backbone for the show’s comedy and is sure to… ruffle some feathers… with his wise-cracks. Best line: “thanks, you just defined dancing!”. On a more somber note… no more jazz hands…

Malory’s character (similar to the previous season) is tasked with being the owner of an establishment. This time, rather than a bar (and criminal empire) Malory is the owner of the Lotus Hotel. Is this a subtle reference to the island of the Lotus Eaters found in Book 9 of the Odyssey? It would make sense, give the patrons alcohol to forget their home and stay in the hotel for as long as possible. A stretch? Probably, but that’s what a humanities degree gets you. The character of Malory is probably amongst the least changed of the cast as she is kept playing the same role: a strong, smart, powerful woman who happens to be the mother of Sterling. 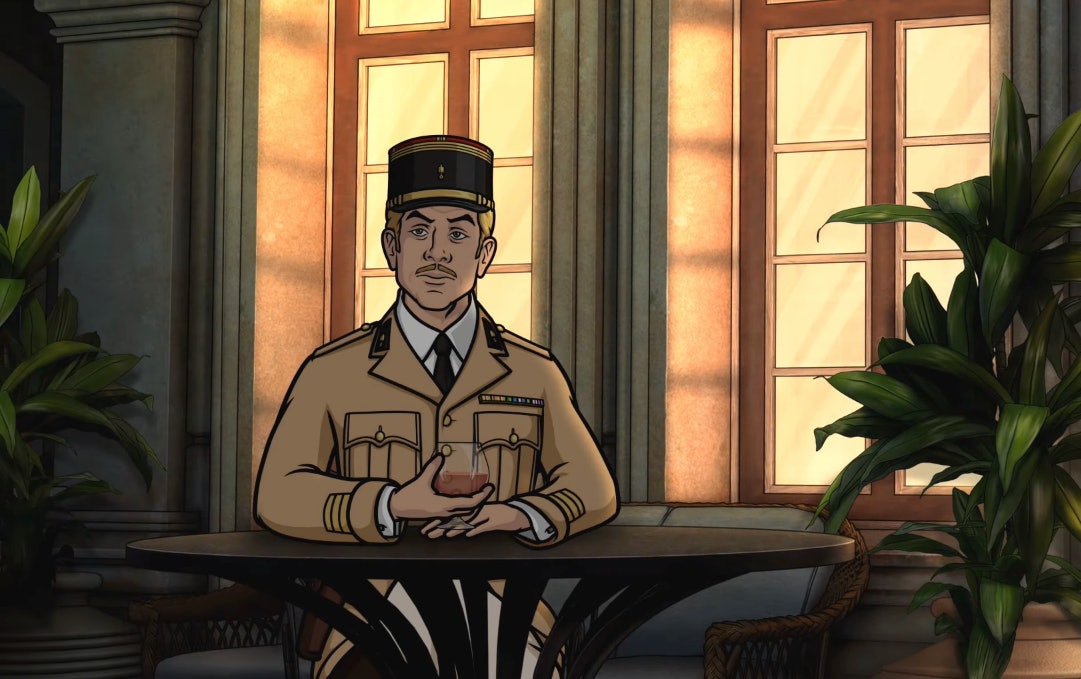 Possibly my favourite reinvention of the season so far is Ray being turned into a French police captain by the name of Reynaud. This character is made as an homage to two characters. His mannerisms and actions (along with dialogue) are inspired by that of Cap. Renault from Casablanca (click to watch how “shocked” Renault is to find gambling in the café… yes Archer does use this scene). His uniform is inspired by the one worn by Gerber in Le Gendarme de Saint-Tropez (1962), which so happens to be a personal favourite. Ray also speaks in a thick French accent which makes this character even more incredible. I cannot wait to see how this character will be developed.

Are these changes too much? Do they deter the show from reaching its full potential?

The answer is NO! The changes and reinventions to the cast and setting allow the writers and show runners absolute freedom over their craft. Danger Island is again supposedly set in the dreaming mind of Archer, still in his coma (which is highlighted with a cheeky reference in the opening of the show where the audience is shown a sleeping Archer with a slight beard – just a hint of hope). This ‘dream’ existence gives the creative team all the freedom to develop characters and progress the plot in any shape, way, or form as there are absolutely no ‘real’ world consequences to the Archer universe. The writers must have used the infamous words of Bill O’Reilly as a mantra during the production of the season:

Is there really anything that these people turned down? It is beginning to feel like an outlandish Family Guy cut-away gag. But, unlike a new episode of Family Guy, this episode of Archer was FUNNY, CLEVER and ENTERTAINING throughout its 20 odd minute run time. Danger Island purposely takes the already established characters and turns them on their heads, and somehow manages to retain their nature. To the chagrin of some, this standalone season is just another wasted season, but for this Archer fan, it is beautiful. We get a whole new set of characters to grow with and enjoy as the 8 episodes progress. No longer under the constraints of previous seasons, the show runners can build a whole new world with countless possibilities to take the audience for an exhilarating ride with familiar faces. It is different, but the Archer principles remain. The cast is stellar, the dialogue is still incredible, Archer remains an alcoholic with an Oedipal complex, and the show is progressing into a new direction that has the promise to be some of the most entertaining episodes it has pumped out.

This concludes part 1 of the Episode 1 review of Archer Season 9: Danger Island. Please check back soon for an in depth review of the plot of episode 1 and then every week for the newest episode of Archer: Danger Island.