Heading into this movie, I have to shamefully admit that my expectations were low. A ‘low’ budget film inspired by films like “Terminator… Robocop, The Thing, Scanners, Total Recall…” with a generic revenge driven plot? “No thank you, I’ve seen this movie before”, I thought. But only now, after a few days to ponder the film (and watch it again in theatres…) do I see how WRONG I was. Instead of the generic and archetypal film that I thought would be projected onto the screen, the audience was treated (and I do not use this word lightly) to exactly what the synopsis stated: “a thrilling and hyper violent vision of the future”.

Sitting at a modest 1h 35m, this film flew by. The pacing was impeccable, no pointless side quests *cough* Last Jedi Casino *cough*, long monologues to explain the plot, nor montages. It is clear that Leigh Whannell paid close attention to the “good people” over at CinemaSins and made a movie that sidesteps the majority of pitfalls contemporary films face. Throughout the entirety of the film, Whannell manages to twist his intricate narrative to keep the audience in suspense. There were multiple occasions where I thought I knew what was going to happen next, and each time, I was absolutely wrong, which delighted me.

The diegetic world created by Whannell is beautiful. The visuals were refreshing, including breathtaking panning shots across the city skyline filled with high rises and gorgeous interiors. Not only were the CGI and practical effects stunning, there was also hints of realism that hit home: a dark and gritty feel that reminds me of Judge Dredd (the 2012 one… not… the other one…). The opening shot establishes (and in this moment my mind registered that it is called an establishing shot for this exact reason) the tech-noir theme (very Altered Carbonesque) right off the bat, and immediately immerses the audience in the world. Self-driving cars AND hot rods on the same road? SURE, why not!

Moving on from the setting to the characters, they key dynamic which pushes the narrative is the relationship between the dynamic duo. In this case, the duo refers to Grey Trace and STEM. After becoming paralyzed and watching his wife bleed out mere inches from his outstretched hands, Grey is offered an experimental procedure (to be done in secret obviously) to UPGRADE (roll credits!) his body in order to walk/move again. The procedure itself is inserting a small appliance called STEM into the stem of the brain which will then reconnect it with the rest of the nervous system.

After three months of loosing all motor functions below the neck, Grey is finally able to move and walk freely thanks to STEM. However, things soon start to fall apart because the plot gods demand it. STEM begins to talk to Grey (by vibrating into his eardrum) and soon convinces him (with the help of the incompetence of the police) to go on a vendetta to kill all of the individuals who attacked him and killed his wife. The majority of the movie’s dialogue came via the banter between these two.

Whannell stated that he took inspiration from Arnold Schwarzenegger’s role in Terminator as he “played the murderous robot so well that you really believed he was a cyborg under that flesh… he IS the special effect in [the] movie”. Therefore, Whannell instructed his lead to channel his inner Arnold and become the special effect – to play the robot so well that the audience begins to bridge STEM and Grey together as one character. If one looks closely at how Grey moves post-STEM, all the movement are ‘robotic’ and stiff compared to the fluidity of motion during the pre-STEM shots. The only criticism that I have is that the remainder of the characters are shown as one dimensional and are not explored or expanded upon. For example, the relationship between Grey and his wife was so rushed, I knew little about her character and when she did die, I was not invested enough.

With the implanting of STEM, the second act of the film begins. From that point on, some of the most brutal and graphic deaths reminiscent to the Mortal Combat fatalities are shown on screen. In order to survive, Grey gives control over his body to STEM during fights and Grey suddenly becomes a ninja (but, as STEM corrects Grey in the film, he is not a ninja… rather he is just super fast and strong). The first death at the hands of a STEM controlled Grey is… shocking. During both screenings that I attended, the audience reaction was very similar: wide-eyed and mouth hanging open. To avoid spoilers, I will not comment on any of the particulars but there are a total of 6 ‘fatalities, and each is amazing in its own way… but the first is still my personal favourite. Not only was the fight choreography incredible, there were numerous chase scenes that added tension, suspense, and highlighted the amazing cinematography .

Numerous high intensity moments, fights, and a very graphic questioning scene fill out the middle of the movie and progress the plot smoothly towards the grand finale and climax (more to come on that later on). The second act feels strangely like a video game: fighting a boss, learning a new skill (in this case, STEM becoming more integrated with Grey) and then moving on to the next one till you reach the Big Bad at the very end. A bit repetitive, but thoroughly enjoyable as we see each new ‘boss’ present a new challenge which forces Grey and STEM to work together to overcome it. The camera work during these fights would make the shaky cam over at the Bourne Franchise proud. 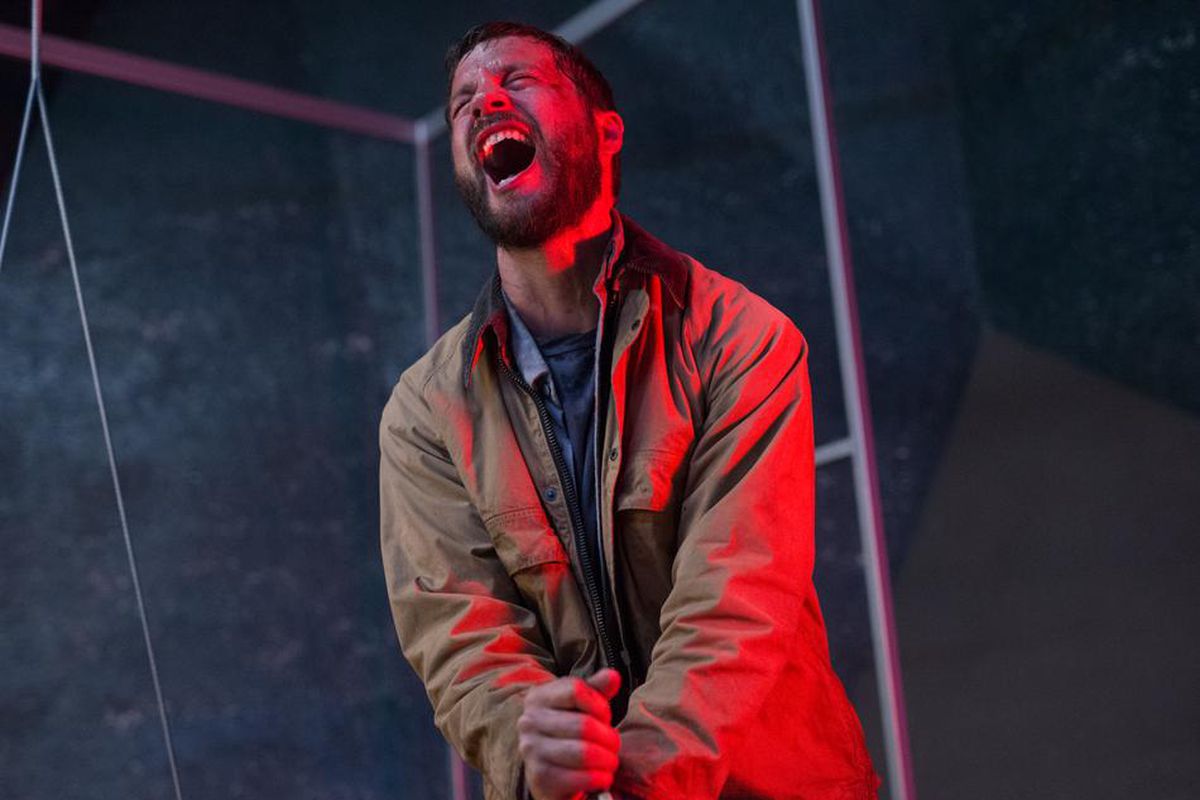 Unlike most movies that falter in the third and final act, Upgrade manages to go above and beyond. Numerous delightful plot twists can be found throughout the final 20 or so minutes of the film. The ending itself left me speechless. Hats off to Whannell for his creativity and the skill of leading the audience to one conclusion and then pulling the rug under.

Overall, UPGRADE is a fantastic tech-noir film that is entertaining from start to finish. The chemistry and dynamic between Grey and STEM really helps shape the movie and the action is done in a very tasteful manner. I highly recommend watching this movie more than once. Great action and great characters.  Amazing story in an amazing world.