The Purge franchise is one that has stuck with me ever since I first watched the original feature back in 2013. While that film, starring Ethan Hawke, was fairly weak, its two follow-ups, The Purge: Anarchy and The Purge: Election Year, dove more into the lore and expanded the brutal series into what it is today. It is a franchise that holds one of the most original cinematic ideas in recent memory and, while not perfect, remains enticing and interesting to say the least. This brings us to 2018 as the series readies itself for the next installment; a prequel revolving around the original social experiment, properly titled The First Purge. Once again, despite some rather choppy editing and predictable story, the film is yet another solid entry into the growing universe (a TV miniseries is next) and provides a vicious look into how the United States fell to a government that took population control into its own hands.

As the name suggests, The First Purge dives into the first-ever Purge night. The New Founding Fathers of America have risen to power and implemented this social experiment to help its people release pent up aggression. Unlike previous films, this story takes place in one location: Staten Island, New York and the story focuses on a powerful gangster named Dmitri (Y’lan Noel) as he struggles with his morality while trying to protect ex-girlfriend Nya (Lex Scott Davis) and her brother Isaiah (Joivan Wade) during the lawless evening. Meanwhile, miles away from the carnage, The First Purge also gives an inside look into the mastermind behind the event, Dr. Updale (Marisa Tomei), and her involvement with the NFFA and how fear-mongering and deceit overtook the nation.

What started out as a horror series, has now become a solid blend of the type of horror Blumhouse Productions has become associated with and full-blown badass action and this is where the film truly shines. While the horror aspects of the film – specifically the cheap jump scares used to jolt the audience – fall flat, the action sequences in the film are some of the best the franchise has seen. Expertly shot by Anastas N. Michos and directed by Gerard McMurray, the film strives to hone a more John Wick/Escape from New York vibe and because of it, the audience will be treated to some superb gun battles and hand-to-hand fight sequences. Specifically, the third act of the film, which takes place almost entirely in a single location (an apartment building), is, claustrophobic action-packed and downright terrifying and it shows that the series can move beyond cheap scares and into more enthralling territory.

That is not to say that every attempt at horror fails as there are instances of solid horror filmmaking. In particular, one sequence involving glowing contact lenses that make their wearers look like ghosts, almost demonic creatures, while the camera moves extremely close to their faces is quite disorienting and horrific.

With the film taking on a greater sense of action, this allowed for more fleshed out and complex performances. The standout of the film is its lead, Y’lan Noel as drug Kingpin Dimitri, better known as D. The First Purge expertly makes his conflicted morality a focal point of the narrative as we see the character constantly shift between loving friend to ruthless gangster to eventually becoming a fierce anti-hero bent on protecting the people he loves. Noel conveys D’s shifting nature perfectly and watching him fight his way through NFFA goons is a franchise highlight. Lex Scott Davis and Jovian Wade star as the brother/sister team of Nya and Isaiah and once again, their relationship proves that this series works best when it focuses on the characters experiencing the Purge event. Nya is fiercely protective of her brother and neighbourhood while Isaiah is driven by rage to go out and attempt to purge a man who humiliated him. Both are given great character arcs in the film and are fleshed out nicely. Finally, Marisa Tomei stars as the creator of the Purge, Dr. Updale. Of all the characters, her role in film somewhat under-utilized. As the woman behind the purge concept, it is rather sad to watch as her experiment becomes the tool of nefarious government officials with agendas of their own but the film does not spend nearly enough time with her to warrant anything beyond a basic “aw man.”

Continuing with the point of the film being more action-oriented, it should be noted that the film does feel over-stuffed at times. With several sub-narratives eventually crossing paths to form one disjointed story, The First Purge has a lot going on despite its prequel nature and unfortunately, this was the most jarring aspect of it. The editing of the film is odd in most instances as the story constantly shifts between people looking to stay alive and others who are out for blood. You do not spend enough time with either to develop a greater sympathy as almost each slow sequence is undercut by a quick jump-scare or loud thud from the background, signaling something bad is about to happen. 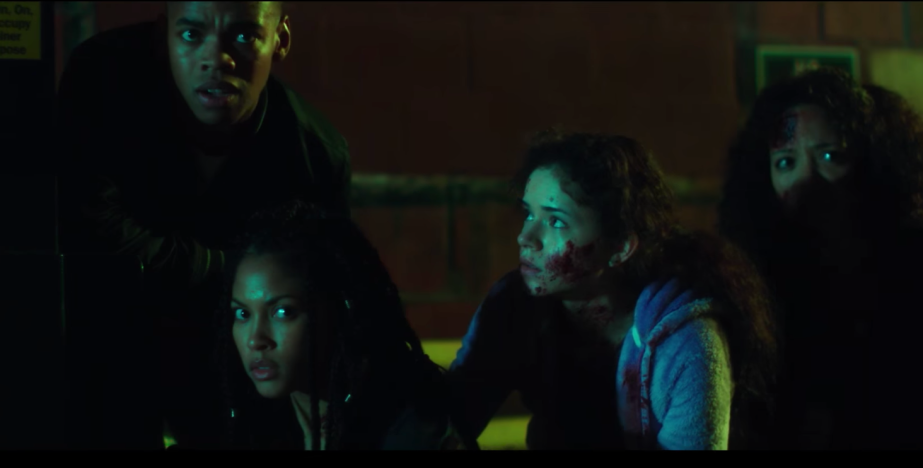 Additionally, and this is not a spoiler as it was stated in the trailers, the most intriguing aspect of the film is that apparently, humans are not inclined to purge. The trailer (and obviously the film) showcase that on the first purge, the government stepped in to move things along according to their plan. With purging not being a part of human nature and the entirety of the NFFA foundation being built on lies, one would think the film makes a case for where humanity stands on this notion. Unfortunately it does not as The First Purge does not make a definitive point about why human’s purge or why they avoid it. Without NFFA involvement, would purging have continued? Probably not but while this all seems negative, it leads into another positive.

Where The First Purge truly succeeds is that it deals with the “why” of the story instead of the “how.” Being a prequel, a film will always run the risk of losing its feeling of having “stakes” because we already know what comes after. Fans know that the Purge is a success and that the American people will continue killing each other. So the film instead asks why this happens and, to some extent (see above) it answers that with the villainous NFFA. When they see that people would rather loot and party than murder, they set out to change the landscape and seeing this newfound government take control like we have not seen in previous films, which leads to faith being boosted in the violent event. These NFFA lead set-pieces made for several exciting and jaw-dropping moments during the film.

A political-satire film that no one saw coming, The First Purge is a welcome return for the series.  Aside from its editing troubles and storytelling faults, the feature deepens the mythology of the horrific world in the best ways possible, introducing audiences to new and exciting characters and providing hard-hitting action sequences that will have your local theatres laughing and cheering at the same time. The series has now officially moved away from its original horror/slasher roots and embraced the political/human evaluation themes that ring true in these more than turbulent times in the USA. All in all, The First Purge surprised me in a lot of ways and I am excited to see which direction the franchise is taking in next.

What did you think of The First Purge? Let us know in the comments down below!