Just like that we are back with more San Diego Comic-Con 2018 panel coverage! Next… Sony Pictures to discuss their upcoming features such as Venom. Follow along below and refresh the page for live updates!

The Sony Pictures Hall H panel kicks off with host Jessica Chobot welcoming the packed crowd of over 6,000 attendees.

Phil Lord starts the panel with saying “We love Miles Morales. He’s an inspiring character.” Chris Miller says Spider-Man: Into The Spider Verse is “nothing you’ve seen before.” It as if you are walking into a comic book.

Moore had aspirations to be Spider-Man. In a journal he kept, he wrote on the front ‘I am Miles Morales’ and “2 years later, it happened!”

Steinfeld is up to talk about her character Spider-Gwen: “I get to play a female superhero. The first Spider-Woman! She’s the smartest, the toughest and the coolest.”

The film takes place in an “alternate dimension to our own” says Phil Lord.

In Spider-Man: Into The Spider-Verse more than one wears the mask. Chris Miller just noted that there are three new Spider-people introduced into Miles’ world.

There are more joining the Spider-Verse. Coming to the big screen is Spider-Man Noir, voiced by Nicolas Cage, SP//dr, Peni Parker, voiced by Kimiko Glennand Spider-Ham, voiced by John Mulaney.

Here is a description of the footage show at the event (it was terrific):

Miles get dressed for school as his pants shrink. He realizes he might have just hit puberty. As he walks through school continuing his thought, text boxes showing the thoughts pop up on the screen like a comic panel. In school, he gets his hand caught in Gwen’s hair and can’t get it out. After he fails to get his hand out, the nurse has to shave her head to get him free from her.

At night, Miles visits Peter’s grave and apologizes for not doing what he wanted him to do. He thinks he can’t do it alone. At his own grave, Peter Parker approaches from behind. Miles accidentally knocks him. As police approach, Miles grabs Peter and flees. Peter accidentally web shoots onto a train and they both end up being dragged with it. It plays like a music video with witty beats of dialogue interspersed.

Later in the footage, Peter is tied to a punching bag. Miles realizes the man is Peter Parker and asks why he isn’t dead. He goes on to figure out that Peter is from another universe and can teach him how to be Spider-Man. Peter freed himself.

There is a hall of Spider-Man suits. Kingpin reveals himself, his body is huge. He is going to hunt Spider-Man. The two flee from a lab and use trees in the woods to run. They are pursued by armed scientists with laser guns. After getting caught in webs, Gwen Stacy saves them, and says she is from another dimension.

The Lizard chases them in a quick cut. Explosions in New York City. Action beats.

In a Spider-Cave, Spider-Man Noir greets them, with Penny Parker her giant robot voiced by Komiko Glenn, and Spider-Ham voiced by John Mulaney. 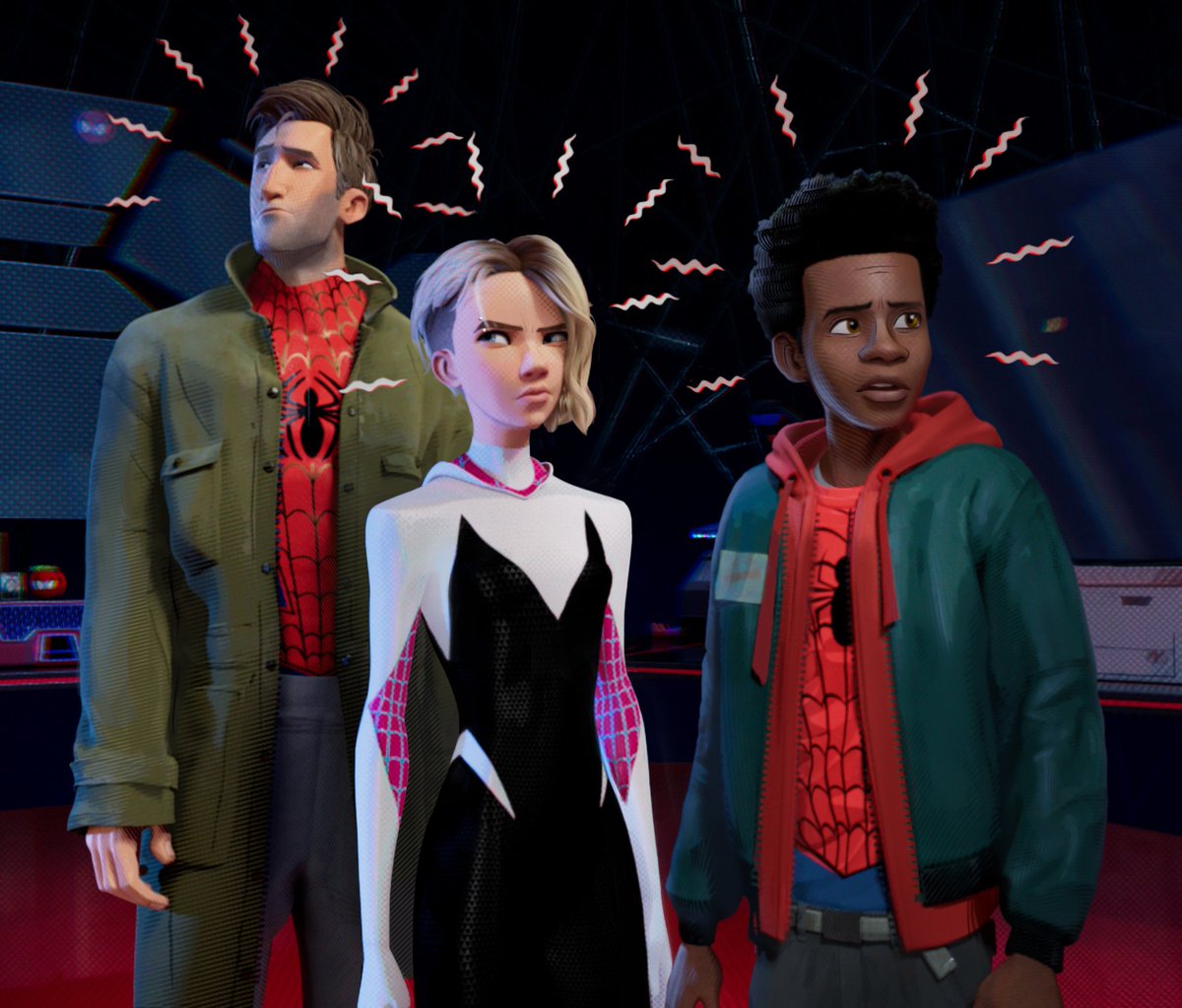 All Hall H attendees cheer “We are Venom!” as Tom Hardy, Riz Ahmed and director Ruben Fleischer enter the stage.

Fleischer There’s no one more perfect to play Eddie Brock than Tom Hardy. He brings so much complexity to this role and elevates it to the next level.”

Tom Hardy says Venom is by far the “coolest Marvel character.” Firstly, he likes the way he looks and that the film is dedicated to his son.

Eddie Brock enters a convenience store. He knows the lady here. She says he looks like shit. He’s not feeling well, obviously. She suggested to him previously that he meditate. At home, he puts a disc in his DVD player and while laying on the floor meditates. Flashes of him running through the woods kick in. He smacks his face on the couch. He pounds pills. He looks unwell and calls someone to say he’s feeling very sick. He awakens, startled. Later, he walks through an alley and sees Venom in the reflection of a car window before being flung against a wall.

Carlton Drake rules that human beings are disposable. Man and symbiote merging is the future. He tests one on a man who is bent out of shape violently. Eddie is tested later. As a result, he brutally beats men in his apartment with Venom’s help. His motorcycle is sandwiched by cars but Venom holds them off.

Venom tells Eddie his previous life is over. Eddie doesn’t want to just hurt people. Venom emerges and talks to Eddie face to face. After Eddie’s body is bent and broken, Venom heals him and stands 10 feet tall. He holds a man up and licks his face.

Drake is proud of his creation. Action scenes flash by. Eddie starts to come around on the power. His gal seems concerned about that. A woman throws spikes out of her back and into civilians at a market.

Venom’s arms turn into giant axes and he wipes out a slew of enemies. More action scenes. Venom fights Drake’s symbiote counterpart. Venom threatens to eat a man’s face off of his head who is bothering the woman in the convenience store. When he asks “What the hell are you,” half the face disappears and Eddie and Venom say, “We are Venom.” Then, he eats his head. Eddie emerges and says goodnight to the woman.

The other symbiote in the sizzle reel is RIOT, says Ruben Fleischer. He can jump hosts, so you don’t know where he will turn up in the movie.

“There may or may not be other villains in the movie – Ruben Fleischer. Did he just hint at Carnage??

Tom Hardy on whether he would square off against Tom Holland in a Spider-Man vs Venom movie. “Yeah, I’d give it a go.”

Ruben Fleischer says that it would be pretty awesome to see Spider-Man and Venom square off in a film and that the studio has to be thinking about it and he hopes it happens.

Tom Hardy voices Venom. While filming he would wear an earpiece and react to Venom in real time when playing Eddie Brock. Ruben says, “It was exhilarating to watch him” during this process.

Tom Hardy describes Eddie Brock as an antihero (tying into the EMBRACE YOUR INNER ANTI-HERO line from the trailer). “His ethical structure is off and he goes around the outside to get things done” but adds that Eddie “does have a good heart.”

Riz Ahmed gives insight into his character Carlton Drake, who founded the Life Foundation – “He wants to do right by humanity.” That’s where his actions stem from.

Tom Hardy describes working with Michelle Williams: “She’s a brilliant actress. There’s nothing she can’t do!”

On describing Jenny Slate’s character in Ahmed says she is the lead scientist at the Life Foundation. “She brings soul and warmth to the character.” She is also hilarious. Riz adds that in between takes she would tell the funniest jokes and monologues.