When describing a Summer movie, one often hears words such as picturesque, light, funny, and inconsequential thrown into the conversation. A movie that runs its time, makes the audience laugh, cry, and sing along – and when it finishes, makes you feel good and then after an hour or so, one stop thinking about it altogether. A momentary hiatus of the bleak reality that we are exposed to on a daily basis. A moment in time that we forget about our struggles and the fact that with a degree in humanities a job at Starbucks beckons. It is because of these realities and existential crises faced on the daily we need movies like these to distract us and make us feel okay when really… we feel everything but. These movies don’t have to be good or question the macrocosms of existence, they just have to exist. No one is expecting a cinematic masterpiece nor a pondering of the human condition.

All we want is to see Dominic Cooper singing a single note over and over again (seeing him out of the Preacher character is really something) while Brosnan, Firth, and Skarsgard and their younger selves singing and fighting over the Streep/James duo. We want to see Cher get off the helicopter and have the whole audience cheer and applaud. We want her to sing Fernando with Andy Garcia. We want to see all the bad signing, the excessive editing, the plot that can be solved by actually talking to people and not having misunderstandings, and the costumes that bring back wave after wave of nostalgia. It does not matter that on its own this movie is classically ‘bad’. The only thing that matters is that it did its job. It was a fun movie using ABBA songs that everyone knows and loves. It offered a 2 hour distraction and everyone left happy after seeing the whole cast perform Super Trooper. 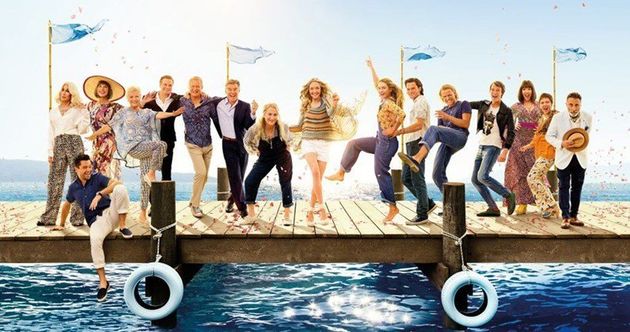 Now, as I wrote above, this was not a ‘good’ movie by any means. The most painful element from this movie was the singing. Although much better than the first movie, the lone standout star (not named Cher) was Amanda Seyfried. Her voice was the saving grace of any musical score she was in. In the opening number with Lady Rose (yes, I watched all of Downton Abbey BRING ON THE MOVIE!) and honestly throughout the movie, the lip syncing was atrocious and it really took away from the diegetic of the movie. Although, James’ singing did gradually improve as the movie went on, mostly because the audience heard the others and compared to them it sounded angelic.

But poor singing is not a hindrance if used properly. One of my favourite bands, The Lumineers’ (previously titled Free Beer in order to get people to come and watch their shows at bars in New York before moving to Denver and finding Neyla Pekarek online), front-man Wesley Schultz said that he is happy with his voice not being perfect nor digitally mastered in post production because it gives the audience the ability to relate to the song and share the raw emotions that are found in the imperfections of the voice. With every note that strays or an issue with the pitch, the singer is humanized and the audience connects. You do not hear the same vulnerability and emotional depth from the perfected sound of (insert generic female vocalist who sounds exactly the same as every other radio pop hit or even the one who swallows her vowels). Similar tactics are used by Mumford and Sons. By no means is Marcus an amazing singer, but he captures to room and fills it with sweet melancholy. Used properly, this technique can have similar effects to the wonderful La La Land. Neither of the main cast members can sing perfectly but it is exactly this rawness that makes them so relatable and enjoyable to watch. We all feel that insecurity and anxiety that the singers are showing. Possibly the best song off the soundtrack is the Audition which has Emma Stone at her most vulnerable and imperfect.

Now back to Mamma Mia. One of my favourite parts of the movie is the setting and the editing. The film was shot on location in Vis Croatia (shout out to Hrvatska and hats off to a 2nd place finish at the World Cup, we could not be more proud). With almost every scene, the beauty of the island was showcased. The picturesque backdrop proved vital as it became part of the movie itself, perfectly personifying Meryl Streep’s character. The setting and the multiple establishing shots and edits really did wonders to the movie. In the words of my mother (who I took to watch the movie with), “the film flowed like wine”wine . Pacing was fantastic. We have the classic jumping from past-to-present, and every time we see James, we are reminded that in the present she has died (a year ago), and the audience and the cast are still coming to terms with her passing. The cinematography is lovely and continues to impress, no longer relying on as many green screens as the original one did. The comedy was also present throughout the movie, following similar notes and punchlines from the first movie.

Along with the settings, the cinematography during the musical numbers was great. For example, Seyfried and Cooper singing One of Us back to back in separate rooms across the Ocean. It was visually very pleasing and took great effort to map it all out. Another standout has to be Waterloo performed Skinner and James. It was a fun, high energy and lovable number that  reworked a classic song with a new theme. However, for this critic, the most powerful and emotional number of the film (and honestly, of both films) has to be the duet (technically three people are singing by only 2 characters) of My Love, My Life. This song set the whole theater in tears. The baptism of Seyfried’s child superimposed on top of James’ baptism of Seyfried in the same church. And to top it all off, we have the ghost of Streep singing face to face with her daughter and then disappearing forever after closing the doors of the church that she herself baptized her daughter by herself. The story has come full circle but unlike Streep’s character, her daughter has a loving family and their support. It was a beautiful moment .

Overall, this movie was enjoyable. It had the audience laughing, crying, and singing along the whole time. Sure, it may not be the most technically executed movie nor does it have the best plot. But what it does have is camp, charm, beauty, and nostalgia… which are things that our world need in times like these.

Would recommend to watch.