So, these are my thoughts on last week’s new comic books. My criticisms and praise of this week’s offering will be released a couple days after new comic book day, with this article being an anomaly (hopefully). So enjoy reading about comic books that you’ve probably already tucked away safely in your long boxes.

The first installment of Bendis’s second ongoing Superman series was a good read that felt superior to his Superman #1 from last week. Action Comics picks up the story thread from Man of Steel about the rash of fires occurring in Metropolis. Bendis plays with the idea of how crime networks would evolve if they had to contend with Superman on a daily basis, which is a great concept to work with. Superman is entering foreign territory that would be more familiar to Batman or Green Arrow, so seeing how the hero responds to this threat to Metropolis should be interesting. The comic also features a last-minute twist that will leave readers scratching their heads, and hopefully will pay off as the series continues.

Bendis again proves that he can perfectly capture the voices of Superman and his supporting cast. The newsroom scene was a great read with Bendis’ trademark back and and forth making the scene like something out of the West Wing. The writer treats Clark in the same way he would a Marvel hero — breaking them down to their lowest and rebuilding said hero while focusing on the essential elements that made them iconic.

Patrick Gleason is an incredible artist and does an outstanding job with this issue, but hopefully future installments of the series will allow the artist draw more imaginative set pieces and characters. I love the street-level feel Action Comics has but I want to see Gleason draw dinosaurs fighting Superman again.

The epilogue to ‘Flash War’ focuses on the history of Wally West and his importance to the DC Universe. It is a great story that delves into Wally’s difficult life, one that was filled with tragedy, and how he always rose above it to be a hero that inspired others. Wally has a long legacy as the Flash and so does Barry. The Flash family was butchered by the New 52 but Williamson has gone to great lengths to restore that aspect of the franchise, and this issue is the perfect coda to his efforts.

The aftermath of Kid Flash discovering his lack of existence before The New 52 was touched on in this issue and it made for the most emotionally resonant part of the epilogue. I was somewhat disappointed that the issue only dedicate done scene to this new dynamic between Wally II and Barry, but it leaves me excited for where Williamson takes the story next.

Scott Kollins drawing this issue was smart move because the artist is well-known for his collaboration on The Flash with Geoff Johns, with that run in particular being the focus of the flashbacks present throughout the story. Kollin’s art is great as per usual, but there is one small exception. His Batman looked so off-model that artistic license doesn’t even provide a defense. Those eyes were just so large and… it did not look good.

This was a great first issue for DC’s next series to spin out of Justice League: No Justice. Tynion uses the introductory issue to set up the team dynamics, the grave threat they face and the tone the series will take as it moves forward.

What truly makes this book stand out, even more so than the previous volume of the series, is the atmosphere that Tynion and Bueno create. This is a horror comic with a couple of superheroes as the central conflict this issue includes elements of body horror and the ultimate theme driving many of the characters is a fear of the unknown. Justice League Dark stands out amongst DC’s new wave of titles because of this and allows the series to offer reader something new. The universe has changed and so have the laws of magic. Unknown horrors await the Justice League Dark but fear not, for Tynion and Bueno have formed a team that is more than up to the task of saving the world. 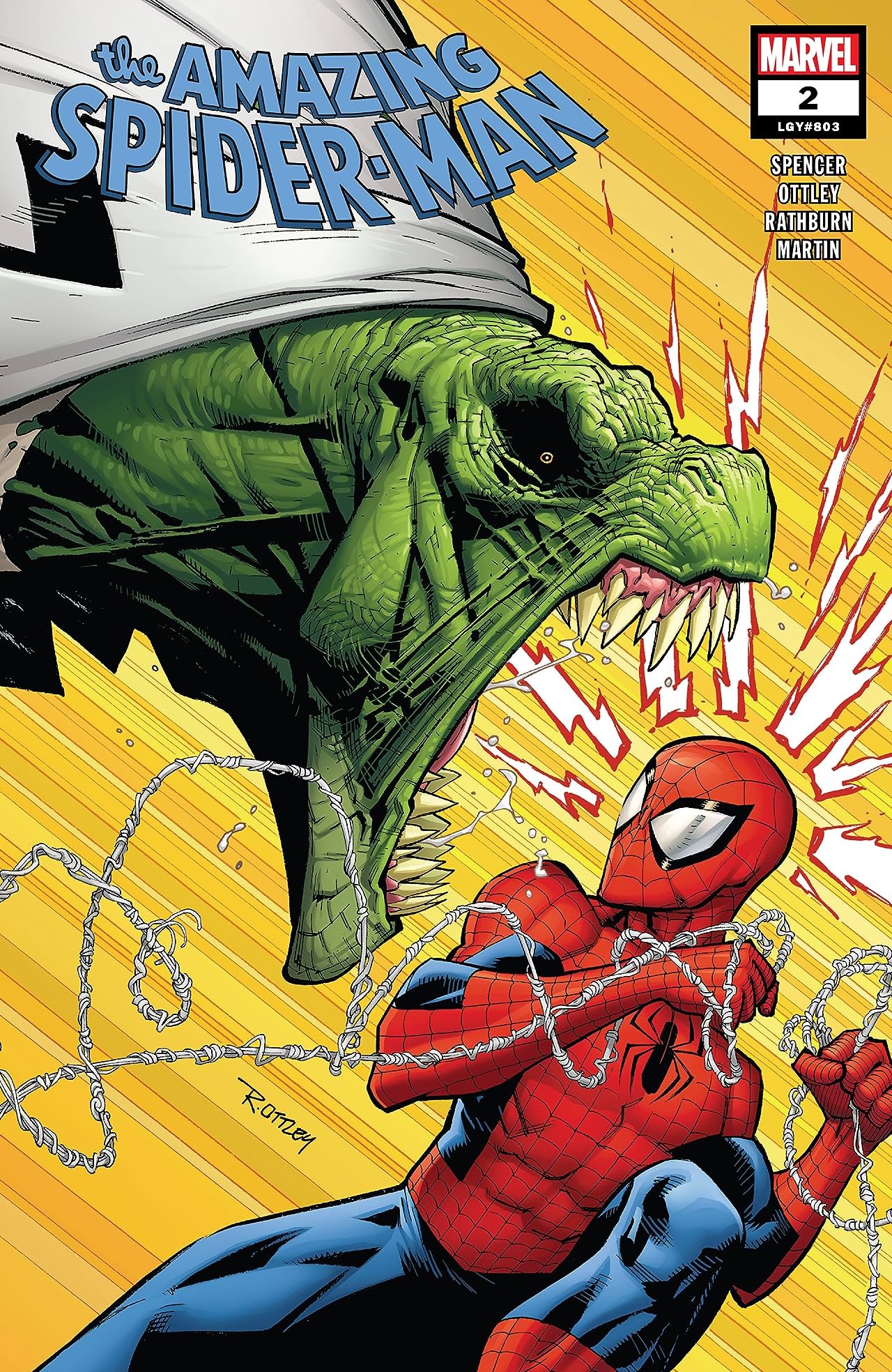 So far Nick Spencer and Ryan Ottley’s Amazing Spider-Man relaunch hasn’t done much to distinguish itself from what has come before, but I’d be lying if I said it wasn’t a lot of fun.  Spencer’s smart dialogue is a joy to read and Ottley was born to draw a Spider-Man comic book. Peter and Mary Jane’s relationship is a small part of this issue, but it seems that things are quickly moving to their pre-‘Brand New Day’ status. It feels very rushed, even with the set-up Slott provided towards the end of his time with the character, so with any luck Spencer will focus on how their renewed relation works in the next few issues. The twist ending was unexpected but can provide Peter with a way to examine his life with and without being Spider-Man. Peter’s personal life is in disarray because of his time as Spider-Man, so the lesson Peter will learn form this new experience will no doubt impact how he moves forward with his current status quo. 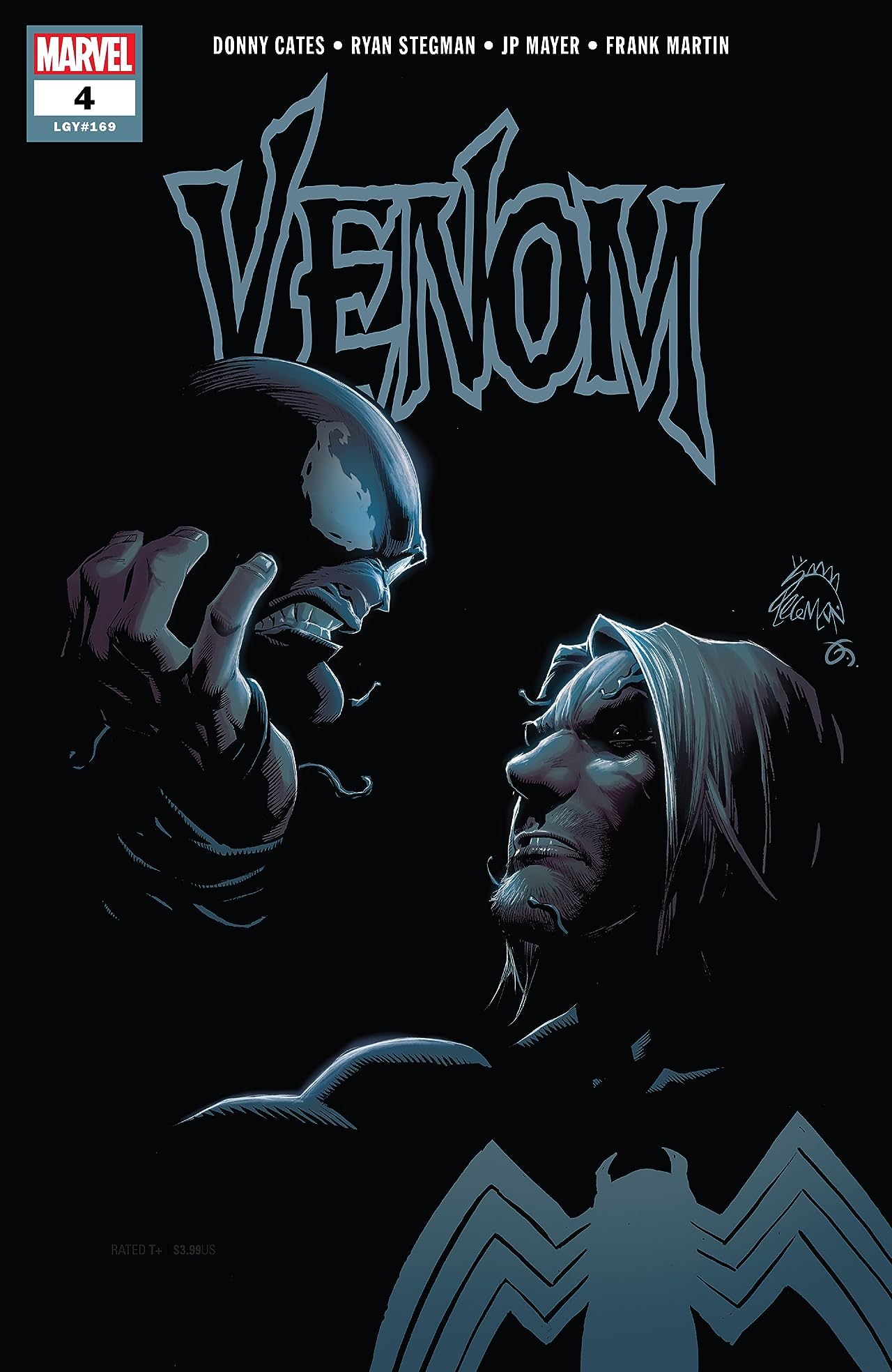 Venom has been an unexpected hit with Cates taking the character to places many readers never could have imagined. Eddie Brock has become involved in a battle with cosmic forces and a powerful god-like being that brings into question everything previously known about Venom’s history. This issue focuses on filling out the backstory of the series main villain Knull who is revealed to be the symbiotes creator. Cates cleverly places his newly created character in the greater context of the Marvel Universe which adds to the scope of his story.  He provides the symbiotes themselves with a new characterization that is full of potential in his retelling of their history while also perfectly explaining Knull’s motivations which are more complex than most world conquering villains.

This is the finale to Lemire’s Image series, or at least this part of it. The finale to the sci-fi comic series was filled with emotional moments, shocking revelations and a brutal ending. It’s tough to say that the bad guys essentially own because this comic has characters that come in every shade of grey one could imagine. Humanity finally has to face the consequences for their actions throughout this series, but it comes at the hands of an opposing force that pretty much acts the same way they did. This comic will make you think and may cause discomfort but that is why it is so good. This comic works in every way with an effective script and gorgeous painted artwork from Dustin Nguyen. I can’t wait for 2019 when we can all read Ascender.

This is one the best books being published by Image and this issue is further evidence of that.  In twenty-one pages Brian K. Vaughn and Fiona Staples manage to punch their readers in the gut several times over.  This is an action heavy issue, with every punch and bloody assault being beautifully drawn by Fiona Staples. The action is not senseless and only meant to entertain on a superficial level but serves a purpose in the story.  Saga is a comic with realistic stakes and it is readily apparent in this issue as status-quo shattering changes occur when all is said and done.  Even though the story is predominantly an extended fight sequence, Vaughn closes the issue with a quite moment that causes an emotional reaction when read after the shocking twist.

A detective story set in ancient Rome where a Sherlock Holmes-esque character searches for answers as to how a Roman battalion was defeated by their enemies, while having a micro-managing Emperor breathing down his neck.  Shall I say more? Yeah, I probably will.

Peter Milligan’s follow-up to his acclaimed first Britannia mini-series starts out with a solid first issue.  It’s not spectacular by any means but it does establish an intriguing mystery and successfully applies some of the conventions of detective fiction to ancient Rome. The characters dynamics work well as Milligan scripts some engaging dialogues between characters and the art, specifically the colouring work, truly brings all of it to life. The only con to this first issue is that Antonius Axia has a lot riding on the success of his investigation and can lose everything if he fails, yet this doesn’t really come through well in the writing. Other than that it’s a good first issue.

Do you agree or disagree with anything I’ve said? Do you think this article should have come out last week? Have I missed any comics that you thought were very good? Let us know!