Last week I mentioned that while the plot of Sharp Objects has stayed at a standstill, the characters in the show have shown their own forms of progression. Coming off of all the action in last week’s episode “Closer”, this episode may seem like it’s brought the show to a screeching halt, but I disagree. While there may not have been a fight or a runaway girl, Jean-Marc Valle still gave his audience more information than they had in the previous episode.

Two big discoveries happened in terms of the murder mystery: a piece of evidence was found, and someone was seen hiding that evidence. Ann Nash’s bike was found in the pond at the pig farm and a worker came forward to identify John Keene as the person who dumped it. Adora and Chief seem to be set on Keene while Camille seems set on thinking that the bike was planted while also raising the question on if the killer couldn’t be a woman. 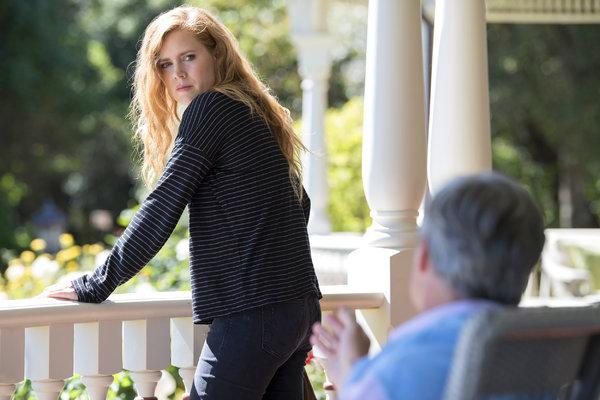 Valle takes a big chunk of this episode and decides to give his audience a closer look at how Amma and Camille’s relationship is progressing. This show has the ability to normalize the unnormal and it’s no exception here.  Amma and Camille roller skate home together after getting high and partying. After they get home, they dance around in circles on the lawn and Amma tells Camille that this is “the happiest she’s ever been.” She also asks Camille to take her with her when she goes back to Missouri.

Amma has shown some small red flags throughout the series and Camille is beginning to be picking up on them. Amma seems to be doing whatever she needs to survive in the small town of Wind Gap and mentions that she can manipulate the guys easily, but girls don’t seem to like her. We’ve seen her attempts at manipulating her drama teacher and this episode showed us her attempts with John Keene. Camille overhears a conversation between the two that seems very strange:

Amma: Who do I remind you of?

John: A bad little girl who thinks she’s a lot cuter than she is.

Amma: Then you should stop watching me. You know how Ashely gets when she’s jealous.

John: I like to keep on you, Amma. Just know I’ve always got my eye on you.

John: It’ll be your day. Soon.

In any murder series, the most obvious suspects tend to be distractions from the real one. Amma and John are both strange in their own ways, but I don’t think Jean-Marc Valle would make it that easy. With how much attention he pays to detail, the journey couldn’t possibly end with an obvious choice. The last line of the episode is up to interpretation. When Marian tells Camille “you’re not safe here”, she could be talking about the town of Wind Gap or Adora’s house itself. There are plenty of characters left that could fit the role of a suspect but if we’re following Camille’s line of thought with the killer being a woman while also wanting attention, Adora could be a possible suspect. It does seem far-fetched that Adora would actually commit the murder but someone like her who not only has power but also respect, could have a deeper involvement then the audience is led to believe.

Or maybe Jean-Marc Valle has led viewers on such a long and complex road that I’m losing my mind from the drive.Who knows?