‘Castello Cavalcanti:’ From Shot to Shot – How Wes Anderson Creates His Cinematic World

When you watch a Wes Anderson film, you are immediately transported away to the world that he has created. No director has such a developed trope and diegetic as Anderson. The colours, symmetry, attention to detail, camerawork, and lighting are all used by Anderson to further heighten the desired effect of each scene and each moment. If shown scenes from The Grand Budapest Hotel and Moonrise Kingdom, there is a distinct feel that they all manage to encompass and relay, regardless of their different narratives and plots. These similarities can be chalked up to numerous elements, amongst them including mise-en-scene and editing. These two elements help Anderson explore the themes and narratives being portrayed to the audience. Anderson loves using and repeating certain elements, and thus, motifs are born.

Some of the more obvious motifs used are: emphasis on shot symmetry, colour, space and composition (depth), lighting, costumes, makeup, acting (recycling the same actors), aspect ratio, long shots and tracking shots, and a distinct style of editing. In the short film Castello Cavalcanti, Wes Anderson uses the motif of symmetry and aspects of mise-en-scene such as lighting, space and composition along with long takes and camera movement/position to further heighten and develop the narrative action and the construction of space and time in the short film. 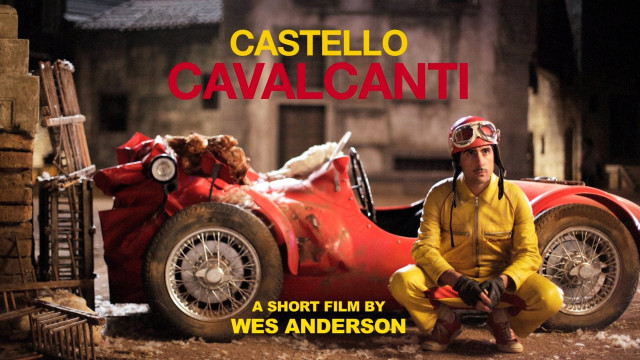 One of the most notable aspects of this short film is (the almost forced) symmetry that each shot contains. At almost every point of the film, one can click pause, and there will be an axis of symmetry in the shot. The first example of symmetry that is presented to us by Anderson can be found in the opening shot – the archway (or the letter ‘m’ above it on the banner) can be viewed as the first axis of symmetry. As the shot progresses and there is a pan towards the right, the edge of the wall that has the neon caffe sign on it is the new axis of symmetry. What is significant about this particular shot is that to the right of the axis there are the characters, props, and lighting – essentially the life of the movie – whereas to the left of the axis, there is nothing but buildings and darkness (this becomes a motif).

As in every Anderson movie, these axis of symmetries are much more than just an attempt to make the shot more visually pleasing – they are used to aid in the development of the narrative. Due to these axes, there is always an object that directs the audience towards symmetry in the shot itself, allowing Anderson to guide the viewers and make them look where he wants them to. This can be used to highlight key characters (such as with the introduction of Jeb and him being at, or right beside, the center of the axis for the majority of the short), or to develop a deeper understanding of the established space/setting of the diegesis. This allows for manipulation within the frame and the frame itself. Symmetry also aids the viewer into developing setting effects through camera movement.

For the majority of the short, Anderson uses MS (medium shots) and LS (long shots) to present his narrative and establish space on the set. He uses these types of shots to develop his setting and allow the audience to become familiar with this new world. The first 3 scenes are used as establishing shots. The first scene deals with a wider approach using a LS to introduce the audience to the setting where the narrative will take place. The second scene is then shot using a MS with a slight low angle that focuses on the group of people seen at the end of the first scene. This allows the audience to familiarize themselves with the characters that will be part of the narrative. The following scene (3), is shot using a MS then a brief LS, and then back to the MS, focusing on even more detail about the spectators and presenting more information on setting.

The inclusion of depth by placing characters in the foreground, mid-ground, and background all helps create a deeper and more profound understanding of the space of the film. The camera movements that are predominantly used in these, and in the rest of the scenes of the short film, are pans and tracking shots (right and left). Anderson uses pans and tracking shots to create uninterrupted and unedited shots which in turn influences the structure of the material. This creates a more natural effect that perfectly synchronises movement in and out of the frame all while capturing the feelings and detail in the film.

Lighting is a key tool used by Anderson throughout this short as a tool for symbolism and the emotional connection between Jed and the narrative. The beginning of the film has a yellow tint with a darker undertone that that mirror the unrest that Jed is feeling. The orange/yellow filters utilized to set the tone and emotional undertone for the beginning of the short will change as the narrative progresses – as does the natural progression of Jed’s emotions and mood (coming from chaos to order). Another example of where light is used as a merger between the diegetic world and Jed’s emotions is when he is on the phone with his brother in law; as soon as he starts speaking to him, a light bulb can be heard breaking, casting a blue light upon Jed which is a form of pathetic fallacy.

A more practical use of lighting change can also be found at the scene when the 4 locals pull out the car from the statue – white light is used to better highlight and draw attention to the smoke coming from the car. At the ending of the short, the yellow tint is all but gone, which is done on purpose by Anderson to show the audience a change coming from the peaceful equilibrium, to the disequilibrium, and finally back to the equilibrium.

Space and composition, costumes, and characterization are also used by Anderson in this short to further develop the narrative and space by juxtaposing Jed and the rest of the village. When Jed is introduced, he in the front the frame, always the center of attention in the scene (symmetry), talking in a fast paced and rambling manner (which juxtaposes the quiet and slow nature or the minimal dialogue assigned to the locals). This along with his yellow and red costume that is brighter and more noticeable (eye-catching) then that of the villages make him stick out like a sore thumb (which plays with the notion of him being an outsider).

As the film progresses, he slowly becomes more comfortable being in the town of his ancestors and gets assimilated into the scenes becoming part of the background (motif of colour) as much as the locals. The dialog that he is given by Anderson also starts to become delivered in a less high key and aggressive pace with more Italian littered throughout, mirroring the transition from American race car driver to that of his ancestors (and the locals).

Wes Anderson is one of the most influential and popular modern directors, emerging from the independent markets to releasing Oscar winning blockbusters. His unique blend of stylistic and cinematographic cues help create beautiful looking and at times quirky movies that create meaning through the overall set of relationships between the different film parts. All of the action seen on screen is due to cause and effect – nothing is done at random or artificially squeezed in. Therefore, through this analysis is it evident how Wes Anderson uses the motif of symmetry and aspects of mise-en-scene such as lighting, space and composition, and the use of long takes and camera movement/position to further heighten and develop the narrative action and the construction of space and time in his short film Castello Cavalcanti.