*As per usual, a spoiler warning is in effect. Please be advised*

I usually start my reviews with a dry joke at the top of the article. But, in this instance… I questioned whether I should. We know what happens in this story. Gary Hart has an affair and his dreams of becoming the President of the United States of America are squashed. Nonetheless, I put it there because of the incredible way that the story was told. How Director Jason Reitman and the writers told a tale as old as time: a politician having an affair, was remarkable in regards to the cinematography and story telling.

The establishing shot (the first shot of the movie) gave the audience in the beautiful Elgin and Winter Garden Theatres a perfect amouse-bouche for what is to come. The single continous shot lasted a few minutes, tracking and panning across (and in) a news truck, reporters talking, TVs showing the DNC, and the front of a hotel filled with people, until it finally approaches the window of one of the hotel rooms. Cut. The next scene jumps inside of the room, or rather, the war room where we see Gary Hart (played by the only actor that can play Wolverine: Hugh Jackman) and his campaign team scrambling. Although worlds apart, the two scenes have a central theme in common: chaos.

After the screening, the Director along with the Producer and two Writers came out on stage to talk about the movie. All four gentlemen emphasized chaos as a key tool they used to make their movie unique. The movie itself was “not [a] traditional bio-pic” according to Reitman. Instead of following the main character, the creative team decided to “follow everyone else, who are trying to do the right thing amongst the scandal”. The script itself is unusual, as it was “co-written by three people”, who all brought their unique “perspective” as they all had prior experiences on campaign trails. The writers understood the chaos and mayhem that is found on this trail and that is exactly what they wanted to bring to the foreground of this film. The movie “is asking you as an audience [to discern] what is important and relevant, and [raises] the question [of]… what flaws are we going to put up with our leaders”.

The writers and Director wanted to present a film where the audience had to be involved, it had to work to watch the movie, it had to sift through the sensory overload and focus on the important conversations, important actions etc… Going back to the opening two shots, we can see this chaos and need for an active audience perfectly. In the opening shot, reporters were talking over each other, non-diegetic music was playing, and noise from the street were all used to drown out the main news report which was giving the audience crucial context to the time and date, and events at the start of the film. In the war-room, people were talking over each other, phones were ringing, glasses clicking, but the main conversation was between Gary and his campaign manager. Reitman stated that, “as an idea we, wanted to present the audience with many things at the same time throughout the film, and give the audience the option to choose”. And they did just that.  They presented a film that gave the audience “3 different things to listen to and see 3 different things”. They wanted the audience to realize that the “most important [action or dialogue] is not always in the foreground”.

However, the most beautiful and powerful shot in the whole movie had to be the final scene: Gary and his wife listening to this withdrawal speech playing on the T.V. This shot used the foreground and background with great emotional gravitas. In the foreground, we see Gary sitting on a chair, head slumped, while his wife sits on the bed, back turned to the camera. A crumbling marriage, fighting to stay afloat after a storm rocked the ship. To the right of them in the background, we hear and see Gary on TV giving his speech. The dark lit room encompasses the emotions of dread and uneasiness: the unknown of the future. Both actions on screen are important, but it is up to the audience to choose which one to give attention to.

As great as the performance of Hugh Jackman was, the whole ensemble was terrific. But more specifically, Vera  Farmiga and J. K. Simmons were incredible. Vera as Lee Hart (the wife of Gary) was played terrifically. The performance reminded me greatly of Claire Underwood in House of Cards. She took the character of Lee and portrayed her as a “woman who sees the world the way it is”.  She brought a lot of “nuance” to the role and it really stood out among the large cast of talented actors. The same can be said with J. K. Simmons’ portrayal of Bill Dixon. His character offered much needed comic relief at times and at others offered a tough depiction of reality. A no-nonsense character who has been in the political world for over 20 years. He really was the anchor of the movie. The rest of the cast had its moments, and made the film enjoyable.

But amongst all these complex and diverse characters, there was a specific one that had to be handled with care: Donna Rice. The woman in the middle of the scandal. Sara Paxton was chosen to portray this character and was tasked with the difficult job of humanizing this person that, for far too long, was “treated like an object”. The director and writers chose to introduce her halfway through the film, not only as this girl on a boat but as a human “who’s life was and would be broken”. The real Donna Rice was shown in this movie and she “thought that Hugh was incredible and she was moved by Sara’s performance and sensitivity”. This movie humanized the object known as Donna Rice, and showed her as this smart young woman. They had other characters constantly asking about her and to see if she was okay. Three notable scenes really stuck out: 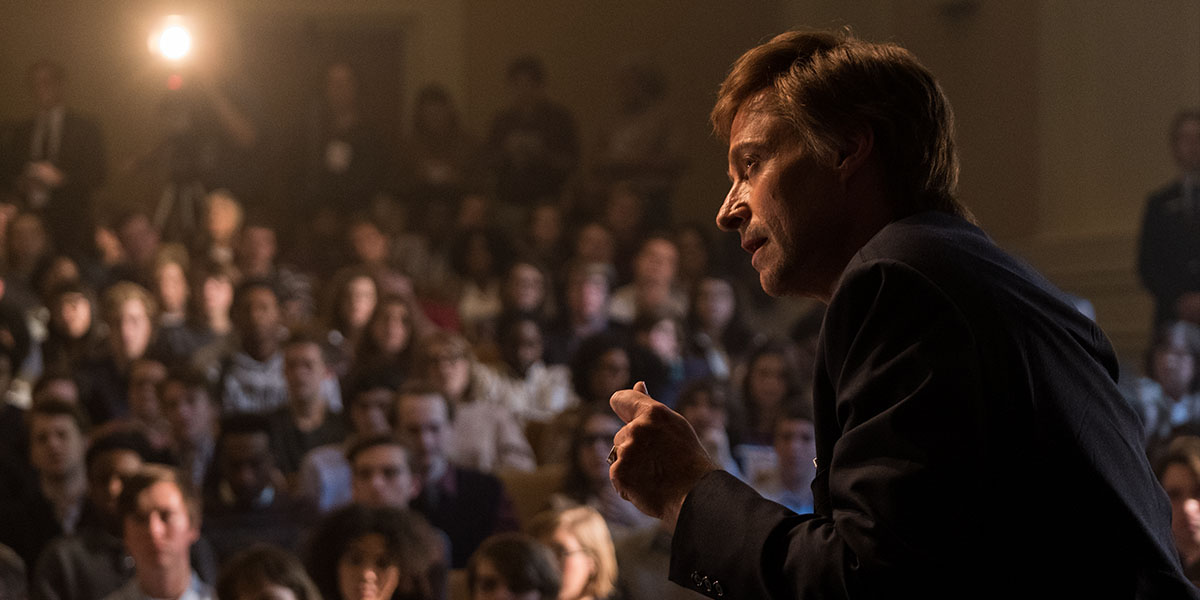 Overall, the movie was an enjoyable experience. Moreover, it left the audience questioning, not just the events of the movie, or morality, but also our current political system and the roles of the media and journalism. As Matt Bai (one of the writers) said, “the system isn’t working… and there is a lot of blame to go around”, not just to the “operatives, the voters, consumers, [but also] to the journalists”. This movie was made to make “everyone think about and reflect the decisions and consequences” of this current system. The film is a “deeply human story”. On the screen and all around us today, we see humans trying to grapple with difficult choices. More often than naught, there are no right choices, just the lesser of two or three evils. It is up to us, not only as the audience, but as humans, to look at ourselves and start taking into account our actions and their consequences. We may not be responsible for the actions of others, but we are responsible for our own.

I would highly recommend this movie. But to get the most out of it, the viewer has to be active and put in the effort to fully appreciate the art behind it.

The Front Runner is set to hit theatres on November 6, 2018.