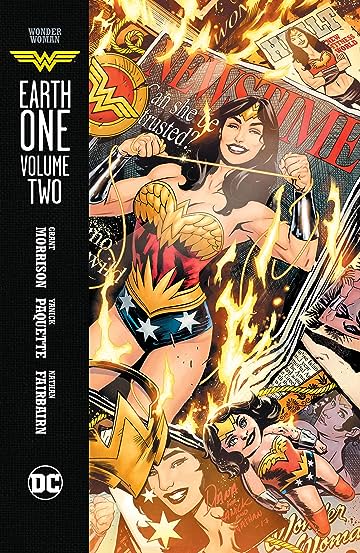 DC’s Earth One line has released the long-awaited second installment of Grant Morrison and Yanick Paquette’s Wonder Woman Earth One Trilogy. How Was it? Volume Two does not quite measure up to Morrison’s other character defining work, but makes for an enjoyable read. A quick summary:

Following the events of Volume One, Diana finds herself facing resistance from Man’s world as she tries to educate them on their wrong doings and longing for home. With the aid of her friends she must battle two golden age enemies, revamped by the creative team to reflect the worst parts of the modern world.

The concepts Morrison is working with in this graphic novel are great. Staying close to the ideas of William Moulton Marston is what makes the series so unique and Morrison doubles down on this in Volume 2 to great effect. Similar to Volume One, Morrison is taking ideas from the golden age Wonder Woman stories without any alterations so as to see how the present world responds to them. Morrison presents the difficulty of preaching a woman led society to the modern world, one that has its origins in patriarchal systems and arguably is still run by one. Diana is viewed as a threat by those in power, who see any disruption of the status quo as being a terrorist threat, regardless of whether or not there is any substance to such claims. This difficulty in preaching Amazonian ideals greatly affect Diana in a negative way.

Morrison takes the naïve and hopeful protagonist of Volume One, and forces her to confront a world that is far more complicated than she originally thought. Her philosophy and presence cause issues on all sides of the societal debate leaves Diana doubtful of her own mission. Between that and her previously mentioned longing for home, Morrison puts Wonder Woman in a vulnerable place – one prime for the story’s villains to take advantage of.

Two classic Wonder Woman villains are re-introduced in this graphic novel to an almost resounding success. Doctor Psycho is re-interpreted by Morrison as a pick-up artist, whose callous treatment of women makes him the perfect antagonist for a Wonder Woman who preaches submission to the opposite sex. Morrison has their conflict play out on more than just a physical level, as the conflict between the two is representative of the larger battle Diana is a part of – one that spans the entire (yet to be completed) trilogy.

Paula von Gunther, the golden age Nazi villain, is featured as part of the larger plan against Diana. Having a past with the Amazons of Paradise Island, her presence in the story is used to re-examine a disturbing and frequently used plot device in the Wonder Woman stories of old. Gunther serves as an example of how flawed any system can be, with her tragic story being a result of abuses from both the humans and amazons. She is a great addition to the series, but like other supporting player in the story, is not given enough space within the text to effectively dive into her character.

Many sub-plots are also included in the book that feel rushed and lack the emotion that Morrison seems to have intended in his script. The titular character’s supporting cast is incredibly bland, with no improvement from the previous entry in the series. Their presence in the story is almost unnecessary as any random stock character can fill their roles. Even a sub-plot pertaining to Queen Hippolyta on Paradise Island is not quite as fleshed out as one would hope. This is all because Morrison came up with a story too big to be contained in 120 pages. Diana finds herself the focus of a large conspiracy that has multiple threads – too many in fact. A more streamlined plot would have allowed for greater focus on Diana’s supporting cast.

Yanick Paquette’s arts is incredible and continues to be one of the biggest strengths of the Wonder Woman Earth One Trilogy. His figures are beautifully rendered and Nathan Fairbairn’s colours add another layer of depth to the artwork that could not be achieved with just line work. The took work well together, with each one’s contribution to the final product only elevates the graphic novel. The design heavy page layouts are this series trademark and add another wonderful touch to already well drawn pages. Each one fits the scenes written in Morrison’s script and only works to enhance the writing.

The Wonder Woman outfit designs in this graphic novel are incredible and varied. Rather than just have one standard costume, the Amazonian princess wears different outfits depending on the occasion – each one themed after the iconic look dating back to 1941. It is a very small part if this book, but one makes Diana more relateable and real.

Ultimately Volume Two establishes that Morrison is trying to craft the All-Star Superman-type story for Wonder Woman – a comic that homages the character’s core conceits while exploring areas of publication history purposefully avoided for decades. The final product is not perfect, but Morrison and Paquette continue to offer the most interesting interpretation of Wonder Woman in over a decade, with this graphic novel making for an enjoyable read.

Mathew ‘JJ’ Simoes is a human being (?) whose existence is dedicated to movies, TV shows, comic books and other associated items of entertainment. He is a Senior Editor for this fine web establishment and studies at a Canadian University. His dreams are typically in comic book format. View all posts by Mathew Simoes