To be upfront about Daredevil’s third season, it made me happy. It has pacing issues and not every character’s motivations are particularly compelling, but it brings back aspects of the series’ first season that were lacking in its sophomore year.

Taking place after the end of The Defenders miniseries, Matt Murdock finds himself wounded and in the care of a group of nuns. Gone for several months, Murdock is considered dead by the world and his friends are left to mourn the seemingly fallen hero. As they struggle to move on and Matt heals his wounds – both emotional and physical – the city is left in great peril. Old and new threats are on the rise. Hell’s Kitchen is not safe and they need their hero, but is Daredevil still up to the task?

Matt Murdock is dealing with the aftermath of his last two adventures that cost him loved ones and almost his own life – which has left him more closed off than ever. Season three is examining the difficulty of balancing the superhero guise and the civilian identity. Not letting the horrors super-powered vigilantes experience consume them. something Matt is struggling with. Daredevil works best when Murdock’s in a bad place, as the character’s inherent appeal is seeing the personal cost of his vigilante career.

The return to the black suit was a brilliant move by the writers because it perfectly reflects Murdock’s mental state in season three. He is not Daredevil anymore following the ending of The Defenders, despite his claims to the contrary. Season one built him into the hero who deserved to where the red suit and season three Murdock is by no means a hero – at least in these initial episodes. He is lost and trying to find a path that can save him and others from pain – this really is Daredevil: Born Again (loosely, as this is not a straight adaptation).

Where season three really shines when compared to season two is the villains. Jon Bernthal’s Punisher was great but he was only the antagonist for the first third of season two. After that The Hand took over as the bane of Murdock’s existence, but they were a faceless and largely forgettable organization. Through returning villain Wilson Fisk and new addition Bullseye, Daredevil returns to what made season one so great: complex villains whose motivations are rich and layered.

Vincent D’Onofrio gives an amazing performance as Fisk and the character’s arc is one of the most compelling parts of season three. Fisk could be described as a broken man in season three, but the thing about the Kingpin is that even when he is beaten, he is not truly defeated. Daredevil took everything from Fisk at the end of season one and the villain has returned with a vengeance. Part of what Fisk lost was Vanessa and his love for her is a recurring element of the first portion of season three. It grounds the character’s abysmal actions in emotions to which any viewer could relate.

Bullseye is one of Daredevil’s primary antagonists in the comics and finally makes his debut in the series this season. He is not exactly Bullseye’ when he initially appears in the season, but the writers quickly peel back the layers of Mr. Poindexter’s psyche and put him on the path to becoming the Marvel Cinematic Universe’s deadliest assassin. Wilson Bethel brings the character’s psychotic and violent nature to life with an excellent performance. Bullseye is a great addition to the series and is proven to be more than a match for old horn-head.

Jay Ali portrays Rahul Nadeem, who is the other newest addition to the main cast. He is a great addition to the series, with the character having an interesting backstory and playing the ‘honest cop’ in a sea of corruption. Ali’s performance is good and the character, despite his moral center, has the potential to go down a very dark path. It makes this reviewer curious to see where the writing team takes his character in the remaining seven episodes. 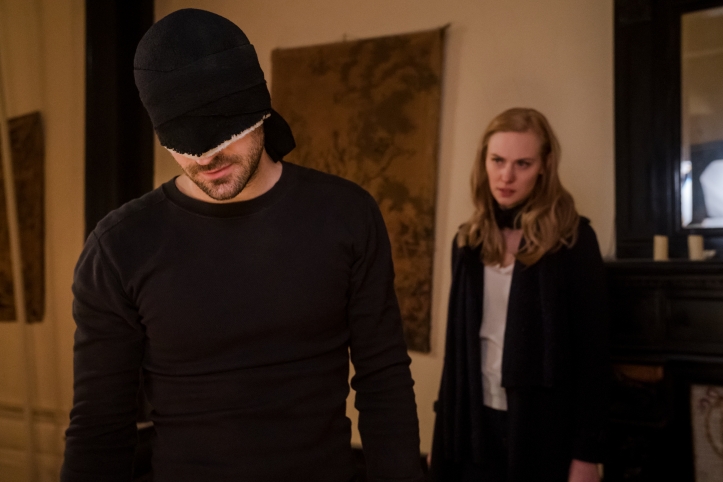 The returning main characters from season 2 are there to help Matt, whether he wants it or not (the norm for Murdock). Deborah Ann Woll gives a solid performance as Karen Paige, who is struggling to cope with Matt’s ‘death’. This makes for an interesting character arc for Karen as she struggles with loss and as a result dives heavily into her work. Karen’s journalistic career is used to help unravel the mysteries woven into the plot as she tries to figure out the larger villain plot. Unlike Murdock’s best friend, Paige is given an interesting independent story-arc. Foggy Nelson works best when his relationship with Matt is being shown, but outside of their friendship it seems the writers do not really know what to do with the attorney. I like Elden Henson’s performance – always have – but the show has struggled to carve out a portion of the show for Foggy since season one.

The weakest part of Daredevil season three is its slow pacing. The premiere is a very good episode that focuses heavily on Matt’s inner demons, but the next two episodes drag out the same ideas for two hours without adding much to the season. It is filler and could have been condensed into one episode. Neither does much in advancing the plot or themes, and are only tolerable due to the excellent performances they contain. However, once you hit episode four the season lives up to its potential and becomes a tight, character driven action thriller. It may be though to get through, but just follow the binge method to get to the good stuff. 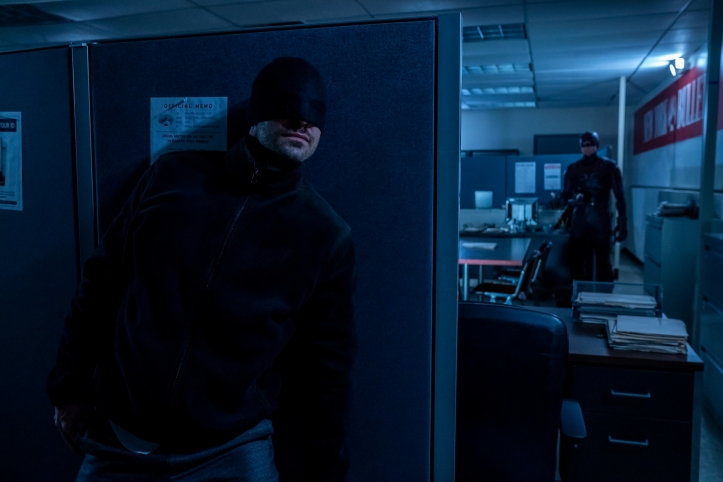 The wait is worth it because Daredevil season three is a crime thriller with the main protagonists finding themselves trapped in a larger conspiracy, all orchestrated by D’Onofrio’ Wilson Fisk. There’s a sense of heightened tension as the series throws a few plot twists and mysteries at the audience to keep them guessing as to Fisk’s endgame. Once the series has its hooks in the audience they will not be able to turn away as Daredevil finds himself in increasingly terrible situations as New York becomes a villain’s playground.

The action sequences in this season are fantastic, with the requisite hallway fight sequence being particularly thrilling. Great choreography and editing make for clear fight scenes that are aesthetically and thematically rich. As previously mentioned, Matt is in a very bad place – and every time he gets into a fight that fact is very evident. As for Poindexter (Bullseye), he has some of the most thrilling action scenes in the first six episodes, with his perfect aim making for some intense battles.

Despite some pacing problems, the first six episodes reviewed here are a promising start to what could be a successful third season for Marvel’s Daredevil. Most of the characters are given compelling arcs, the tensions are high, the fight sequences are fantastic and… no more faceless ninja death cults. Season three could be a return to form for the series, assuming the rest of the season is just as good and the pacing remains consistent.