‘The Nutcracker and the Four Realms’ Film Review

The November 1st release date for this movie tells all. Once again, as soon as Halloween passes, Christmas takes a stranglehold of the market for the following couple of months. Walking into an Indigo Book store (or, for you purists out there, a Chapters), the decorations were festive, and the music of Michael Bublé has defrosted, filling the coffee scented store. Christmas is a beautiful time of year, filled with family, food, parties and the obligatory gifts. I love Christmas (for those reading this review, please feel free to leave gift suggestions for my dog in the comments below). The festive season is also home to this feeling titled nostalgia. Disney, in a unprecedented move decided to capture this feeling of nostalgia and release a movie loosely based on The Nutcracker, a beloved classic. Sarcasm aside, this is not the first time that the House of Mouse adapted parts of The Nutcracker, as Fantasia used The Nutcracker Suite as one of its songs. This time however, they decided to do a live action version. What could go wrong?

This rendition of the Nutcracker is executed in such a way that it immediately fills viewers with nostalgia and glee. The opening shots of the movie show a Downton Abbey (or Peaky Blinders, yes the two shows roughly cover the same period) era London covered in snow on Christmas Eve. The long establishing shots were accompanied by the incredible music of Tchaikovsky, which had even the most cold hearted critics in the theatre (myself included) swaying to the mesmerizing waltz. This drawn out shot encapsulates and perfectly sums up the movie: a visually pleasing ode to The Nutcracker for a younger generation of moviegoers. At no point does the plot fully immerse you into the story, nor are the effects/CGI stunning, nor is the action even necessary. But what can be said with certainty is that it all looked visually stunning.

However, referring to my previous point, this movie is meant for a new generation of moviegoers, and with this new generation, they have been indoctrinated into watching water down films with Marvel level actions and overused character tropes that are universally simple to understand. And that is exactly what Disney produced. By no means is this a BAD movie. Sure, it will not be up for any major awards (other than makeup/costumes) but it does the job. Disney takes an A level cast (which includes Kiera Knightly, Dame Helen Mirren, Morgan Freeman, and Mackenzie Foy), a classic soundtrack, and a big budget to create a Christmas film that took little effort or creativity. Toys will be sold, merchandise will be bought, and albums will be listened to. All in all, this movie will earn Disney millions; a job well done.

In this movie, we have action, CGI, irrelevant side quests, more action, false suspense, pointless self-sacrifice, and a female lead who is by all accounts a ‘Mary Sue’ (a Mary Sue is, as Wikipedia puts it, a character that is “idealized and seemingly perfect”)… Did I just describe The Last Jedi? Fortunately, the acting in The Nutcracker is actually delivered  really well. Kiera Knightly does an incredible job portraying a deranged psychopath, who launches into intertextual pop culture references at the most disturbing of times. Mirren and Freeman bring some much needed gravitas and stability to the flimsy script along with their star power. Foy does a great job acting out a character that inhibits any individualism (she had practice acting in a similar way during her tenure as Renesmee Cullen in Breaking Dawn Part 2). The chemistry between Foy and the father in the movie along with her relationship with the Nutcracker soldier are awkward to look at and uneven pacing hurts character development as a whole. A quick IMDB search shows that the actor playing the Nutcracker, Jayden Fowora-Knight, is appearing on the screen for the first time. For a first, this was an excellent job. Hats off the Fowora-Knight. The rest of the cast was… stale and ridiculous. The comic relief of Jack Whitehall was criminally underused.

Moreover, there were points throughout the movie where plot-holes were so large, sharks the size of The Meg could jump through them. I will refrain from divulging the plot but they will become evident as the movie progresses. Another point of contention is the character of the mother. She is just a bad person. Sure, leaving a kingdom that she created alone without any central authority or a system of governance in a quasi-federal state is a bad move, but worst of all, she called her daughter (one of three children) her “greatest creation”. Apart from the mother, this movie condones state invasion of subnational entities, regicide, a coup d’état, and too much verbal exposition… Okay fine, I may be reading into the movie a little too much… but there are serious problems that cannot be simply glossed over or ignored because this is a “kids movie”. For example, issue of over exposition can be seen as a thorn across the film. One of the most beautiful scenes of the movie sees a ballerina performing the narrative of the Four Realms. The dancing and emotions portrayed by the dancers were incredible, but the writers decided to give Knightley’s character annoying expositional dialogue to describe all the events, instead of forcing the audience to look at the screen and actively engage within the filmic diegetic. But no. We have to be spoon fed information and details to make the plot understandable. 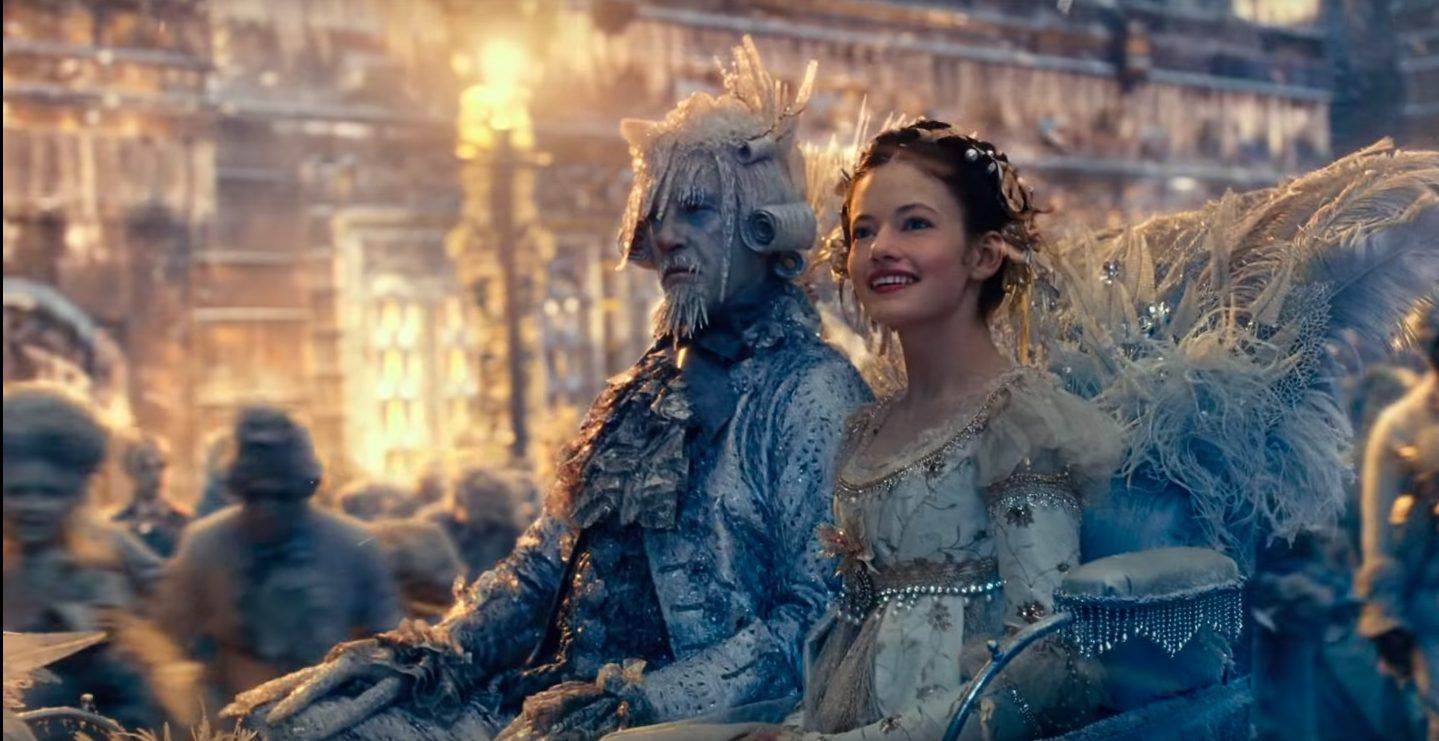 Overall, this move did what it was created to do. It gets people into the Christmas spirit and earns Disney a few million dollars. The acting overall was average, the story was heavily supported by archetypes and a simple narrative premise, the music was great, and the cinematography was wonderful. Add a pinch of Narnia, a smidge of Alice in Wonderland, and a tablespoon of every other fantasy action thriller for children and we get The Nutcracker. All in all, the movie could have been a lot better… but it could have been MUCH worse.