‘Tis the season… the season for Christmas movies. Slowly but surely, more and more holiday themed films are being pumped out by studios and streaming networks alike (looking at you Netflix). In my previous review, I may have come off as someone who doesn’t particularly like Christmas or the holidays in general. That is certainly not the case. I love the holidays, spending time with family (hey mom), taking my dog out for walks in the snow, Christmas music, gingerbread, etc… Surprisingly, I can add another note to this list in the form of the movie I am currently review: The Grinch.

When I heard that there will be another animated Grinch movie, I shrugged it aside thinking nothing more of it. “Another kid’s movie to take parent’s hard earned money” I thought. It can be said that I was being a real Grinch (yes, that was intentional).  Then, the marketing started. Unlike the magical fairy-tale/winter wonderland lens that most marketing campaigns for children’s holiday movies are presented in, the advertising for this this film was unapologetically different. It stood out from the hordes of advertising that we get bombarded with on a daily basis. It was in your face. It was funny. It was original. It was green. It was The Grinch. Hats off to the marketing team for creating this campaign which stayed true to the character. The humour behind the posters, the subtle nuance in the trailers, all of it was executed perfectly. The more content I was exposed to, the more I wanted to see the movie, the more I was excited to see the movie. The pinnacle of this campaign was reached at the Toronto premiere. Projected onto the big screen before the movie started was this incredible shot of the Grinch slyly looking upon the audience with the following quote written in big white letters:

“YOUR DATE IS JUST HERE FOR THE POPCORN”

Thankfully, I didn’t bring a date so my popcorn was safe… Regardless, the tone was set for the rest of the evening. As soon as the lights dimmed the laughs began. 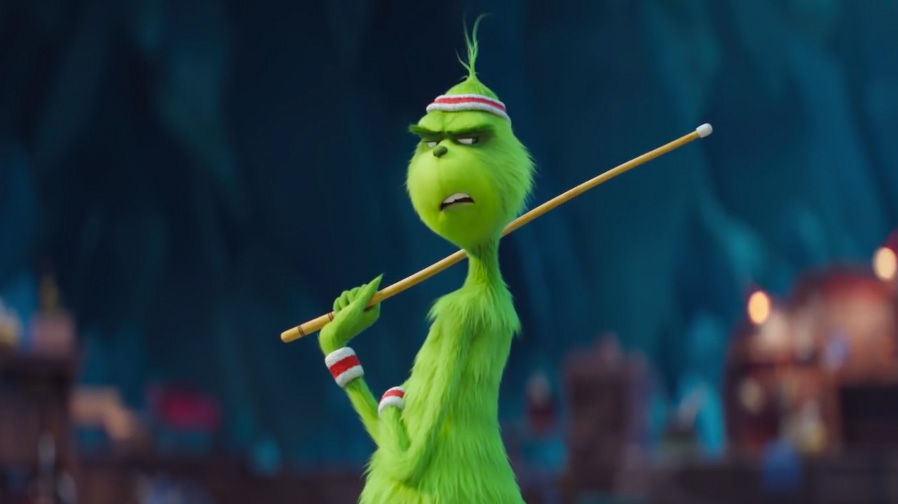 One of the most impressive aspects of this film was the way in which the writers managed to tell a timeless story in a novel way. The writing was fast paced, effective, and light – just what a viewer wants from a film like this. The characters themselves, especially Cindy-Lou Who and the rest of the Who’s were further developed from the original source material. For example, the 2018 Cumber-Grinch is no longer the central focus of the film. Unlike the two previous adaptations, the 2018 version spends a larger amount of time on the other characters. The Who children get side stories and adventures, the Grinch’s clueless neighbour is a recurring joke (since when does he have a neighbour), and the animals (not named Max) serve little to no purpose. In no way is this a bad thing though! The Who’s are an integral part of the story in order to fill up the animated feature’s run time and the animals are there to sell merchandise.

Compared to the nightmare that was the 2000 Grinch (the Who’s makeup alone is more than one can handle) the 2018 version fleshes out these characters, depicting them in a more positive and useful manner. However, nothing beats the original 1966 Grinch – minimal interaction between the inhabitants or other characters (except for Max). In 1966, the Grinch was the centre of attention, giving us archetypal Grinch and the one that is most faithful to the source material. As each re-imagining followed, the narrative expanded, more characters were added, and the story’s central focus shifted away from the Grinch stealing Christmas, to the Who’s lives leading up to Christmas and the Grinch suddenly deciding to steal their presents.

Moreover, The 2018 Grinch’s portrayal in this version is very different from the Grinch found in the 1966 and the 2000 live-action adaptation. First of all, his backstory is changed (and the dreadful love triangle is left out). This wise choice was done in order to drive up the level of pathos the audience feels for him. In an interview, Cumberbatch states that “once you understand why Christmas is painful for him, you kind of root for him a little”. Another difference can be seen through the depiction of the relationship between Max and the Grinch. No longer just a dog that so happens to be living with the Grinch, the 2018 Max is his only friend. The relationship is the catalyst of the movie – progressing the plot and pulling at our heartstrings. The opening scene was my personal favourite in which Max makes the Grinch his coffee. The writers intentionally make Max the lovable cute dog in order to show us that the Grinch is not all that bad – that deep down he has a heart. And what better way to show it then by giving him a dog.

On that note, The Cumber-Grinch is also the most likeable and relatable Grinch yet. Essentially, he is a green version of Gru from Despicable Me: mischievous but ultimately harmless, has a very cute sidekick (Max > Minions), and at the end of the day his heart is thawed up by children. Now, this reliability and painting the Grinch in a more positive light is where the movie shifts away from the source material, for better or for worse. The original Grinch was The Grinch. A conniving recluse that hates everything fun and jolly. Everyone knows and loves this version of the Grinch. The 2018 reincarnation essentially pulls back all of the negative aspects and only spend a handful of scenes  establishing the now famous character traits. In other words, the 2018 Grinch is like a vegan version of a Julia Child’s recipe… It has no butter! Butter in this case refers to the character traits that have became synonymous with our Green friend. Cumber-Grinch is much more safer, much more likeable, and much more marketable.

The comedy is also different. In the true spirit of Illumination Studios, the comedy relies heavily on slapstick and pop-culture references. It also does an amazing job at at intertwining the traditional family style comedy and the compulsory bits of adult orientated humour that makes both parent and child laugh. However, it should be noted that most of the comedy in the movie relies heavily on the relationship between the Grinch and Max – essentially using their misadventures and bodily harm to make the audience laugh. Even Fred the Reindeer was basically another Max. The other standout comedy moments in the film are again found during the duo’s adventures.

The voice acting in this movie was great. Mr. “Happy” himself Pharrell Williams is our narrator. Although not as commanding as Boris Karloff in the 1966 version, Williams provides an eloquent and thematically appropriate rendition of this role. However, since the release of the film, many fans have voiced their displeasure with Cumberbatch’s  performance of the Grinch, but personally, I liked the tone and style of his performance. It fit the general mood and tone of the film – a Grinch with a deeper more sinister voice just would not make sense! The rest of the cast was also top notch. Not to mention the music in the film went beyond expectations. Tyler, the Creator in a children’s Christmas movie? Who knew it would work! I have to admit, it was a bit weird listening to him rap over the classic song, as images of him eating a roach in the Yonkers music video kept flashing in my mind. Another aspect of the movie that went above and beyond was the animation itself. The whole movie was beautiful. The attention to detail, especially with the Grinch’s fur was amazing. For obvious reasons (i.e. merchandise sales) every character was made to look cute and adorable, but it does not take away from the movie in any significant way. I actually prefer the new looks of the characters than the ghastly versions found in the 2000.

All in all, this movie accomplished what it set out to do. It told the classic story of the Grinch for a new generation of kids in a novel and entertaining way. The voice acting was great, the animation beautiful, and the humour was funny for all viewers. It was an enjoyable and fun watch and I can’t wait to watch this movie again next year to see how it aged. Also there were many Easter Eggs in the film – for example, the Grinch’s scarf is the same colour as the Cat in the Hat’s hat.

I would highly recommend watching this movie if you haven’t seen it already.