Since the Game of Thrones finale in May, we’ve all been on the hunt for a new high fantasy series and Amazon may have just given us an option for our replacement in the form of Carnival Row.

The main storyline in Carnival Row plays out almost like a supernatural version of Criminal Minds. Set in a Victorian era London-esque world, we follow the lives of human detective Rycroft Philostrate (Orlando Bloom) and his former love, Vignette Stonemoss (Cara Delevigne) a fairy from Anoun, as they deal with the consequences of a string of murders in the city.

It’s always interesting to see Cara Delevigne on screen and seeing how her elegance on the runway translates to her acting. In playing Vignette, Cara’s modelling background shone through and gave her a clear advantage in exhibiting Vignette’s magical grace. As for Orlando Bloom, he truly encompasses the rugged yet sensitive character that is Philo. 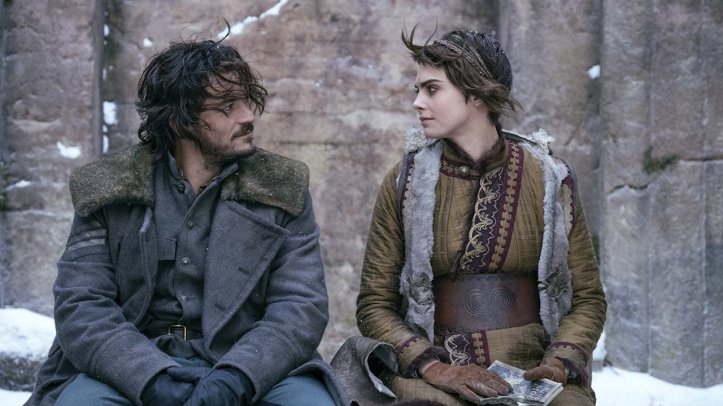 Carnival Row seems to have a lot of borrowed ideas from various outlets. Whether it be tropes that we usually see in fantasy series that we all enjoy from time to time or from real life reports, such as with the connection one can make between Jack The Ripper and Unseelie Jack, a character that shows up in the first episode. A lot of it seems almost as if we’ve seen it already. However, there are two things you can do with this: you can either take that and choose to lose interest or take it for what is it and look for how Carnival Row spices up these common themes and makes it their own.

Since we’re already talking about comparisons to Game of Thrones, I did want to point something out about Carnival Row. There is a lot of gimmicky fairy sex, making it almost as if everyone has a sexual fascination with fairy wings and quite honestly made me a little uncomfortable. Especially when there is a connotation in some of these relationships that the fae are exotic and different, creating a narrative of a forbidden and ‘dirty’ relationship. It seems as if the creators simply added it in to create a wow factor response and fill in the gaps in the story.

Although I have been making comparisons to other shows…that doesn’t go to say that Carnival Row isn’t a good show. One thing that Carnival Row really has going for it is the intricacy of its world. No detail is too small – from the details in the creation of places like The Burge or Anoun, to the variety of supernatural beings. Creating a fantasy world is no easy task, especially when it holds inspiration from real life, as Carnival Row does with setting it in a time like the Victorian era. At the end of the day, if we weren’t allowed to borrow ideas or use familiar tropes in series, we wouldn’t have much to watch. I think that the true test is what you do with those things and how you make them stand out differently then your predecessors story and Carnival Row does a good job at that.

Another thing that I truly appreciated about Carnival Row is the way that it explores issues of racism, xenophobia, and misogyny seamlessly. Being able to have shows such as Carnival Row bring topics like this to light in an easier to digest way is so deeply important. You can easily replace the fae and pucks or quite frankly any of the supernatural beings with any minority group and see these issues mirrored in our world today still. Not only does Carnival Row explore the external aggressions presented to minority groups, but it also explores internal conflict and struggles within those groups. For example, there are doctors that may perform procedures such as shearing or clipping wings, bobbing ears, or other elective surgeries to create a more human looking appearance for the fairies and others like them. The idea that one must pass as the majority in order to be safe and accepted is evidently seen through this side-story and is an occurring theme throughout the show and yet again, mirrored in our real world.

While the show was generally enjoyable, there were a few things that I simply couldn’t get over. For one, Carnival Row is dark. Literally dark. At some points, I found myself squinting and attempting to turn the brightness up on my computer only to find that it is already at its maximum. Perhaps the show was trying to lead a mysterious and ominous atmosphere but on my end, it just seemed as if it was a result of poor execution and perhaps a lack of proper budget allocation.

The second thing that I couldn’t let go was the wings on the fairies. For the most part, the features on the supernatural beings in the show were great. For example, I absolutely adored the way they designed the horns for the pucks. But the wings…just didn’t impress me at all. They seemed very animated and cartoon-like next to the their other counterparts. Although I understand that there must have been limitations when it came to designing the wings as they did have to function and move, whereas the horns on the pucks were just stagnant features of their appearance, I do wish that they looked less like an animation and more life-like.

Overall, Carnival Row is a great match for fans searching to fill that void in their heart after finishing Game of Thrones or for any lovers of intricate fantasy worlds generally. Carnival Row gives us a fun and exciting world that has potential to get better with future seasons and with Carnival Row being renewed for a second season already, even before it’s public premiere, leaves me excited to see what the show has to bring and how it can improve.