Hidden Figures details the true-story, set in 1960s Virginia, where three brilliant African-American women overcome bigotry and sexism to become the brains behind the launch of the first American astronaut into space. The film was directed by Theodore Melfi and stars Taraji P. Henson as Katherine G. Johnson, Octavia Spencer as Dorothy Vaughan and Janelle Monáe as Mary Jackson. This paper will argue that Hidden Figures is model for feminist geography concepts such as intersectionality, by which the film’s content and structure focus deliberately around this concept. This will be done by initially establishing a common sense understanding of intersectionality, followed by a series of critical reviews of several major narrative beats and story lines.

It is important to understand that the theme of intersectionality is the driving force which gives this film its content and structure. Legal scholar Kimberlé Crenshaw was the one who coined and popularized the term, which is a concept described by Gill Valentine as “the way in which any particular individual stands at the crossroads of multiple groups” (Valentine 12). Therefore, it ought to be reasonable to suggest that “someone at the intersection of three systems of oppression—a disabled black woman, for example— would be more oppressed than a black woman who was considered to be at the intersection of only two” (Valentine 13). One must be cautious, however, for this way of thinking can be interpreted as essentialist given that it implies that a set of differences are to be added incrementally to one another. It assumes that there exists a base identity (white, male, able-bodied) on which other identities are added. You cannot comprehend the experience felt by a black woman by simply combining the experiences felt by a white woman and a black man (Valentine 13). 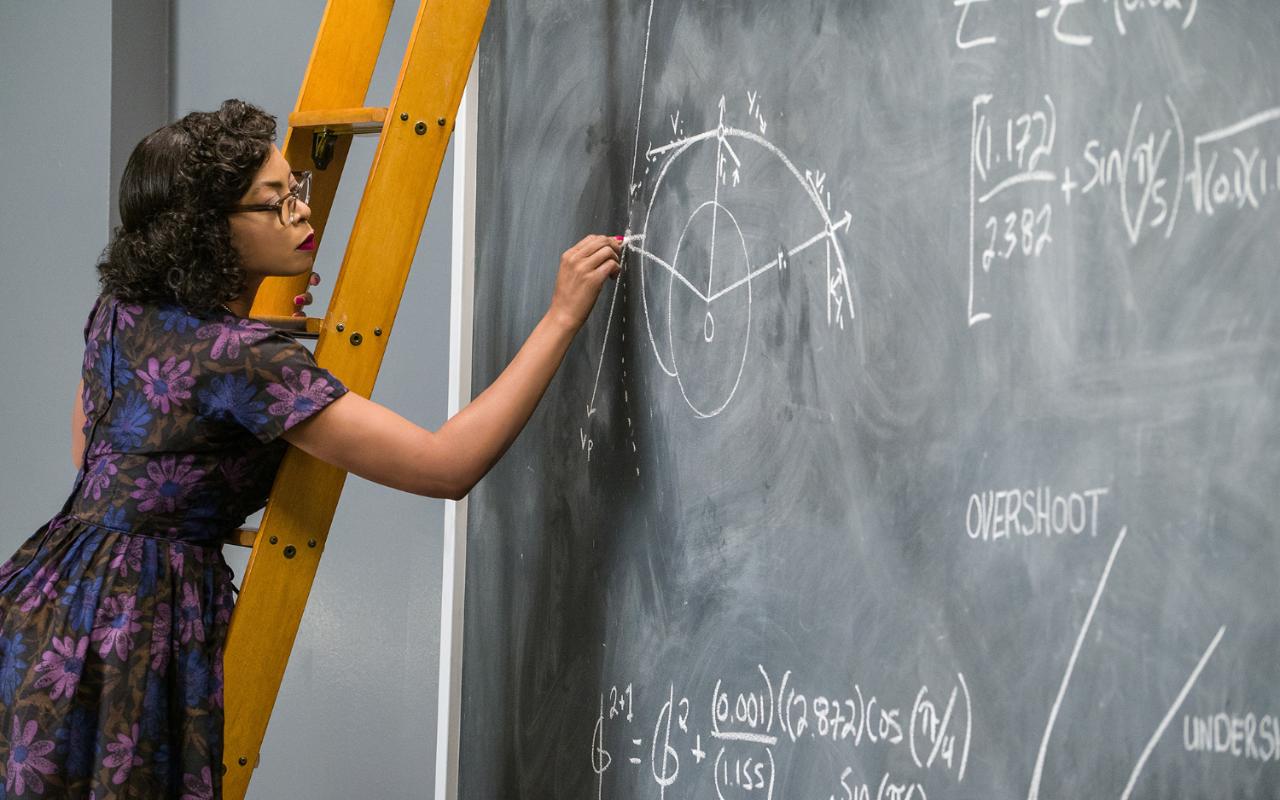 How does the Theme of Intersectionality Surface in the Content and Structure of the Film?

Hidden Figures personifies these ideas by showing how culminating experiences of white women and black men cannot account for the experiences of black women. As mentioned above, intersectionality surfaces in the film’s content due to the plot of the film being about how black women not only had to overcome bigotry during the film’s hostile setting (Virginia in 1961), but also the sexism still present despite the women’s rights movement in the 1920s. Moreover, intersectionality surfaces in the film’s structure for director Theodore Melfi and writer Allison Schroeder knew that they would need to show the differing aspects of racism and sexism and how they accumulate and provide the experiences felt by the three protagonists of the film. In order to illustrate how the theme of intersectionality surfaces in the film content and structure, three differencing plot lines will be considered. The first will involve Dorothy Vaughan’s and Vivian Mitchell’s plotline. The second will be referring to Katherine’s relationship to her love interest Colonel Jim Johnson. And finally, in order to highlight the full perspective of the film’s theme of intersectionality, the third plotline that will be analysed will be Katherine’s relation to Paul Stafford.

The film paints a clear picture that it does not matter if you share their gender or race, you can still be oppressed by people who themselves are oppressed. Within the first case, Vivian Mitchell refuses to give Mrs. Vaughan the title and pay of supervisor. Considering the film does not spend enough time developing her character, and considering the theme of intersectionality, it is not unreasonable to assume that perhaps Mrs. Mitchell’s actions are racial motivated. She is the only white women that interacts with the black women and is the closest thing to an obstacle which prohibits Mrs. Vaughan’s narrative to progress. With the settings of Virginia in 1961 and NASA (a mostly white male dominated area of work at the time), you can conclude the Mrs. Mitchell was discriminated as well. However, the sexism she faces is not comparable to the one that Mrs. Vaughan faces or at the very least Mrs. Mitchell’s account of the sexism she faces will be much different than Mrs. Vaughan’s. Crenshaw argues that “women of color experience…sexism in ways not always parallel to experiences of white women” (Crenshaw, 1252). This is exemplified in the setting in which we find where the black women work, and the white women work. The black women are marginalized into in the far west wing and operate out the basement in a crammed room. On the other hand, we see Mrs. Mitchell operates out of a much more spacious room with a lot of natural light. These working conditions are meant to parallel each other in the film, in order to show the difference between black women and white women and how their account of work life is inherently different, despite sharing the same gender.

In the plotline involving Katherine’s relationship to her love interest Colonel Jim Johnson, the audience see clear signs of sexist behaviour. But, unlike the previous and subsequent examples, the film does not give this plotline the development nor the time it deserves, which could have been done for a variety of reasons. It could be that more development into this plot would have made the film too long or too over bloated. But, considering the film they are making with the theme of intersectionality in mind, it is imperative that they include at least one scene depicting the difference between a black woman and a black man. The scene in reference is the one in which Colonel Johnson is flirting with Katherine, in which she describes her work at NASA. This leads to Colonel Johnson to say “they let women handle that sort of…taxing [work] (Hidden Figures, Directed by Theodore Melfi). This kind of dialogue adds to Katherine’s characterization, in which she is being underestimated based on her gender. Despite them both being of African-American decent and facing the discrimination towards their race, Katherine is not immune to the sexist comments from Colonel Johnson. The purpose of this scene, though short, is to depict that even though both individuals are facing discrimination due to their colour, their gender differences still play an active role in how Katherine is treated or viewed.

The last plotline under review, which is meant to bring the theme of intersectionality into full perspective, is that between Katherine and Paul Stafford. Paul is main antagonist of the film by being the main obstacle for Katherine. If you wanted to understand how Katherine, a black woman, has to deal with a hybrid of racism and sexism, then no person exemplified those experiences better than the way Paul treats Katherine. Mr. Stafford throughout the film feels threaten by Katherine since her arrival to his department of engineers. It is not explicitly made clear whether its her nature of being a woman or being black, but his outright disapproval appears to be a mixture of both. Whether it be the addition of a “coloured” coffee pot, or his rejection of her admission into crucial Pentagon meetings based on her gender, Paul actively makes Katherine’s time miserable. This resentment towards Katherine is never resolved, even after the film’s climax.

In conclusion, the theme of intersectionality surfaces as a driving force for the film’s content and structure. The use of the various interactions between Mrs. Vaughan, Mrs. Mitchell, Katherine, Colonel Johnson, and Paul all aim to highlight this theme throughout the film. Whether it be between white and black women, black men and women, or white men and black woman, intersectionality has no limits as it plays a significant role. This film should be an example for the needed focus on intersectionality in feminist geography, for it truly grasps the key concepts one must know when trying to understand what someone from two or more discriminatory categories is experiencing.